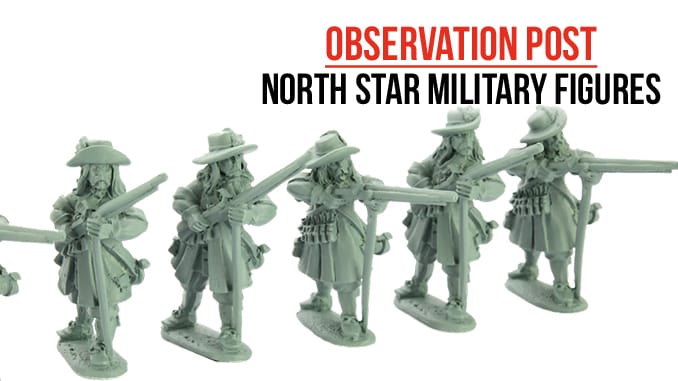 North Star Military Figures continue to add more packs to their 1672 range. The latest two packs are these Spanish Musketeers, suitable for the period and possibly earlier.

Each pack consists of 4 figures, one firing and the other ready to fire. The packs consist of one of each pose available. They wear the standard ‘uniform’ of the time, complete with bandoliers of cartridges. What makes these figures suitable for earlier conflicts is the use of musket rests. Although most musket-armed troops had weapons which where light enough to fire without rests by 1672, the Spanish had traditionally used a heavier weapon than the norm and continued to use the rest during a number of battles, with records suggesting they were still in use by some troops even in 1683. Of course, this makes these figures useful for pre-1672 armies, adding to their usefulness.

The level of sculpting and overall ‘look’ of the miniatures is up to the usual high standard and has enough variety to create decent regimental ‘lines’. In an era of ‘floppy hats and lace’, these look like hardened warriors rather than effete ‘popinjays’.

Although the 1672 period may not be to everyone’s taste, North Star has some of the best figures on the market, both generic and nation-specific examples. More importantly, the packs available allow you to rapidly build a force, with infantry, artillery and cavalry,  the company also offers a number of army deals for those looking for that ‘one-stop shop’ experience. Whatever your needs, North Star have you covered.