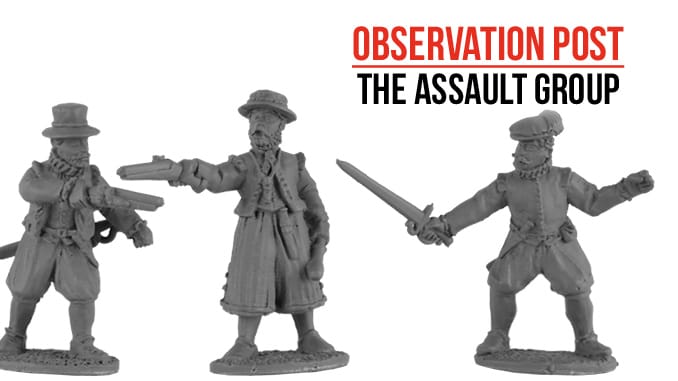 The Assault Group are a dynamic UK based company with an expanding range of miniatures for a host of periods. One of their most popular has been figures for the Renaissance era, including the recent addition of Dutch ‘sea beggars’ to the line.

The sea beggars were powerful military units that made capturing coastal cities in and around the low countries easy. These fierce privateers under the command of a succession of daring and reckless leaders, the best-known of whom is William de la Marck, Lord of Lumey, were called “Sea Beggars”, “Gueux de mer” in French, or “Watergeuzen” in Dutch. Striking form their ships, they would enter a port, swarm ashore and take the town or city by speed, surprise and sheer force of arms.

Received for review is one pack from the range, Sea Beggar Captains. The four figure pack has four characterful miniatures, attired in typical finery of the period and ready for action with either heavy pistol or sword ready. These are well sculpted and cast miniatures, taken ‘off the shelf’ at a show, thereby demonstrating the consistent quality that The Assault Group are known for.

Just one small part of a much wider range, it’s always worth a visit to The assault Group site, as it is pretty much a ‘one-stop shop’ for gamers of all interests.