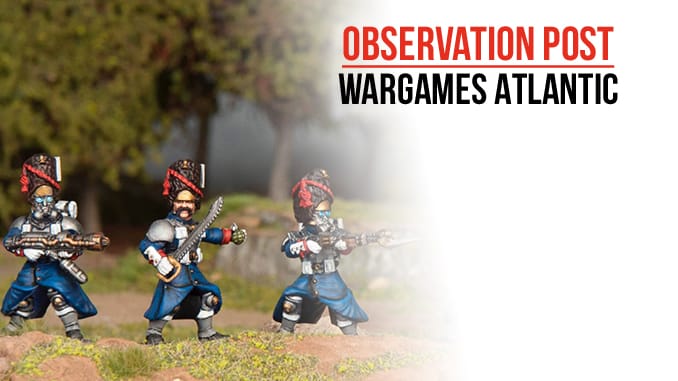 Wargames Atlantic are rapidly becoming one of the most innovative manufacturers of multi-part plastic figures on the market.  One of their ranges is titled Death Fields and is designed to represent the use of soldiers kidnapped from Earth over the years who fight in a battlefield arena for the pleasure of alien masters.

The frame we have for review comes from the Les Grognards set. These are soldiers from a French background who have become warriors in the arena. They encompass Napoleonic era members of the Imperial Guard, through the Poilu of World War One, down to the Metropolitan soldiers who fought in the French Indo-China War.

This particular frame is themed around the production of three figures in the Adrian helmet of World War One. The frame contains three bodies in greatcoats with turned back greatcoats and a choice of various weapons, all with a sci-fi ‘slant’ but akin to the muskets and rifles the soldiers would be used to. The three packs on the frame look more Napoleonic than the other items, whereas the other parts have a more sci-fi origin. These are ‘heroic scale’ plastics, meaning that they are large enough to fit in with similar sci-fi infantry from other manufacturers.

The quality of design and moulding is on a par with many much larger companies, and the overall look is certainly more unique and interesting compared to those already on the market. I would have liked to see the Napoleonic heads and the kepis but will happily wait until the figures are released to explore them in more detail.