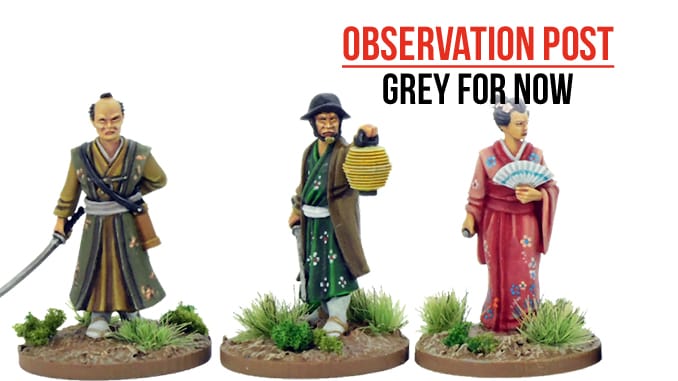 The eagerly awaited Test of Honour 2nd Edition rules will soon be out, presented as a set of rules in a box-cum-slipcover with all the tokens and other items that you could need. Of course, a new edition needs new models, and here we have 8 of them, characters all, designed with a different take in mind to those of the past

Entitled Unlikely Allies, this set is slightly different to the previous expansions – you can certainly use them together as a complete, and very characterful force, but the individuals are also designed to be added into other forces.

The story is that each of these eight figures may be found in a typical teahouse like so many seen in classic Japanese Samurai movies or TV shows. Each one is named and comes with full game stats for their use with the Test of Honour rules system. The characters are the Hostess, owner of the tea house, a Ronin Marksman with a musket, a Clan Envoy, a high level samurai warrior, a Wise Old Man who has seen it all and knows much, a Priest whose piety is designed to inspire others, an Ashigaru Deserter, who has run from his lord’s service, the local Watchman who acts as a form of police officer and the Blacksmith, a large man who knows how to wield a hammer!

The in-game abilities of each figure are found on the 18 gaming cards found in the set and are designed to help the friends around them. For example, the Blacksmith improves everyone’s weapons while the Watchman can remove enemy Cautious markers and helps during night battles. However, they can also provide their services as individuals to other groups in the game and could be the difference between victory and defeat.

The 8 metal miniatures are wonderfully evocative and have a great deal of character. The boxed set includes suitable bases for each figure. This is a different and unusual set of figures that adds a new, more narrative flavour to what was originally marketed as a set of tabletop battle rules. In that sense, this and the current re-branding of the metal miniatures currently available adds new vistas of gameplay to this hugely successful game.

We will be looking at the Test of Honour 2 rules in next week’s Primetime.