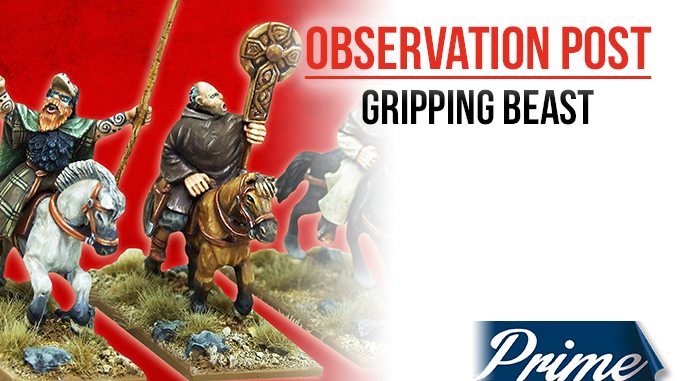 Gripping Beast continue to expand their range for the SAGA Dark Age and Crescent and Cross skirmish games. Their latest offerings are more Priests, Pagan, Celtic Christian and Christian. Interestingly, these are all mounted on horses, enabling them to move more quickly across the battlefield and accompany mounted troops into combat

The mounted Pagan Priest carries a staff and is depicted exhorting the aid of the Gods themselves. Heavily bearded, he wears a cloak and headgear fashioned from an animal’s skull.

The Celtic Christian Priest wears a monk’s robes and carries a Celtic Cross, whilst also having a shortsword hanging from his belt.

The final horse mounted figure is a Christian Priest, in monk’s robes once again but from a later period. He carries a staff topped with a Medieval era cross and wears a basic helmet.

All the miniatures are well sculpted and are in good quality poses, with some sense of motion and suitable levels of characterization in each. They would prove useful for those wanting to add a little religious support to their forces or as part of a command group.