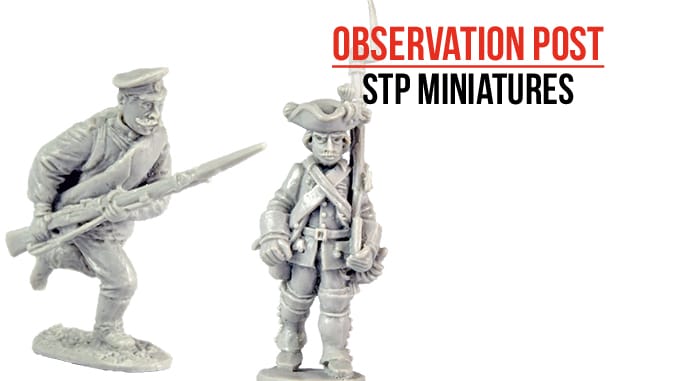 STP Miniatures of Saint Petersburg, Russia are another company with not only a unique style, but also some excellent sculpts. Available in either polyurethane resin or metal, these figures are full of the type of character which lifts figures from simple toy soldiers to miniature heroes.

The Civil War 1918 to 1922 range contains some well animated sculpts designed to represent both White and Red Russian forces during this tumultuous period. Whether fighting one another or serving as part of a force in the Back of Beyond, these are some of the most detailed figures for the period and look great in either resin or metal.

The Seven Years War Russians are also highly detailed, with a mixture of characterful sculpts that either have a realistic or slightly comic take upon the subject. However, whatever the intention, these are incredibly accurate versions of the uniforms and equipment of the period, even down to the more ‘on campaign’ look of some of them.

The final choice sent our way, a Russian Napoleonic artillery crew and gun, consists of 6 figures in shakos. These are once again some wonderfully characterful figures, with glorious mustachios, extremely detailed uniforms and equipment and suitable poses for their different roles in the gun crew. The gun itself is a nicely rendered piece as well, with some good details right down to the wood grain.

Once again, this is a company based in Russia that is producing some excellent miniatures in two very different materials. STP not only sculpts and produces their own ranges but also offer a painting service for those who are interested. Russia appears to be an increasingly diverse market for those looking for something different and are producing some unusual or unique styles of miniatures that challenge the dominance of the West.