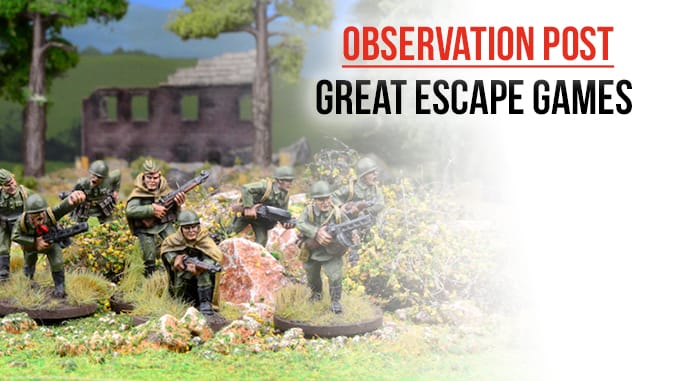 Great Escape Games have added three new packs to their World War Two range. There are a Romanian infantry squad in winter clothing and a similarly attired command group and a platoon box of Soviet infantry in summer dress.

The Romanian release has a four man command section, consisting of an officer, NCO, medic and a rifleman. Both the officer and NCO have Beretta Model SMGs, plus the medic has a pack and armband with a pistol. The infantry squad is 10 men, most of them with rifles but also an NCO with a SMG and one figure with a Ceska Zbrojovka LMG. All the figures have heavy winter clothing and scarves, although none are wearing gloves to cope with extreme temperatures. Let’s hope touching frozen metal doesn’t take their skin off!

The Soviet infantry platoon is all in the Summer uniform and are grouped together into a boxed set. There is a four man command group of an officer, NCO, medic and sniper. The officer carries a pistol and the sniper’s pose is very nicely done. There are two ten-man squads of infantry, with a mix of rifles and PPSH SMGs, plus a DPM LMG in each squad. This gives the Soviets some serious firepower. There is also a figure, possibly an NCO, with a captured MP40 and suitable magazines, not something you see in many ranges. All the figures wear the two piece summer uniform and have light equipment and there are weapons teams for the DPMs. A mix of sidecaps and helmets add to the overall ‘look’ of the platoon.

These figures would be suitable for use with any of the main World War Two rulesets currently available, thanks to a mix of weaponry being in each squad. They are well sculpted and in suitably ‘active’ poses, plus some of these sculpts have a real sense of character rather than caricature.