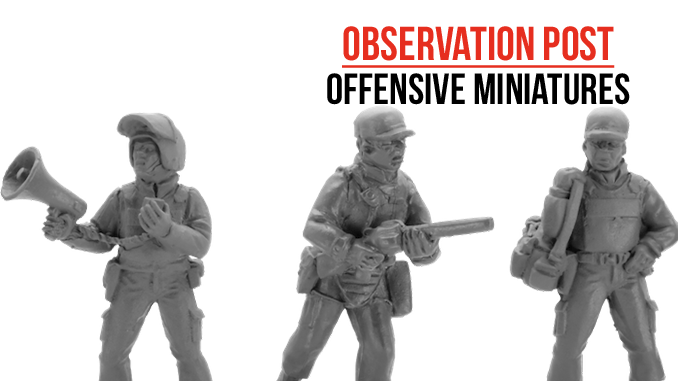 Offensive Miniatures have a fantastic Near Future range that has been out for a while but is well worth a second look. The Rioters, Protesters and Police miniatures are pretty much the best on the market for those looking to add something extra to their tabletop.

With such a wide selection of figures, it’s hard to pick out just a couple of packs. The 4 figures shown below are pretty much typical of the sheer variety of poses which can be found. Some of the figures come with cast on improvised weaponry, placards or similar, whilst others come holding nothing or without hands! Each set comes with a number of metal cast ‘extras’ which may be added to the figure. In this case, we’ve added scaffolding poles to two of the figures, whilst the remaining two are straight out of the pack with a folding chair held aloft and a cricket pad and bat.

The second pack is Police Support Team Three. This consists of 6 figures in total, all in police riot uniform. The figures represent a first aider with medical bag, a fireman with extinguisher, a video and potter team of two miniatures, one figure aiming a baton round weapon from the hip and a final figure with riot helmet and megaphone.

These are fairly generic figures which could be used for pretty much any nationality in Western Europe. Granted, some figures have a slightly British look (not many nations would take to the streets armed with a cricket bat and wearing pads as armour). The fact that you can add your choice of provided weapons and equipment to the rioters means that you can customise your ‘mob’ to your heart’s content. Something a little different for your modern or near future gaming, and it’s good to see that Offensive Miniatures are still offering such unique miniatures.