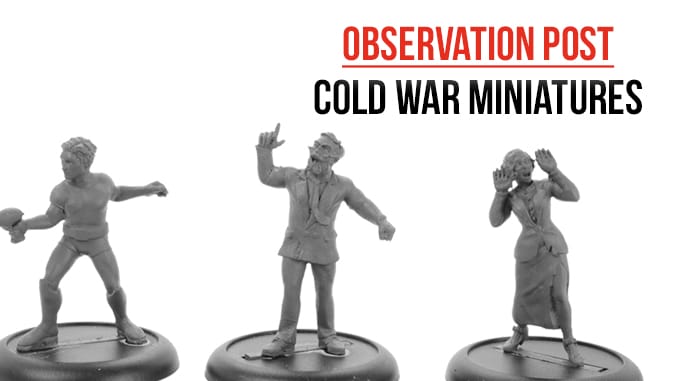 Following a successful KIckstarter, Cold War Miniatures have added to their ranges with these Princes of the Universe figures. If you’ve ever watched the old black and white serials which used to feature at the movies or later on TV, then you’ll recognize the types of characters in this range.

The figures sent for review are taken from a number of packs. Each figure is available as a single miniature pack. The character packs come in three different versions, ‘Earthling’, ‘At Peril’ and ‘Space’.

Doc is an Earth scientist with an interest in exploring other planets, and is posed pontificating upon the matter.

Gail is a top journalist in a male dominated world, but she’s never faced the level of danger she’s facing right now!

There are also three members of the Imperial Fleet, the minions of the Emperor himself who act upon his every whim. We have an officer and two crewmen, in suitably alien close fitting caps and uniforms.

The overall level of sculpting on these figures is excellent. They look almost exactly like the 3D renders they once were, with expressions that are akin to the source material and a nicely done set of small details. Available in pewter from the company website, these are a fun set of retro sci-fi figures that would please any interested gamer.