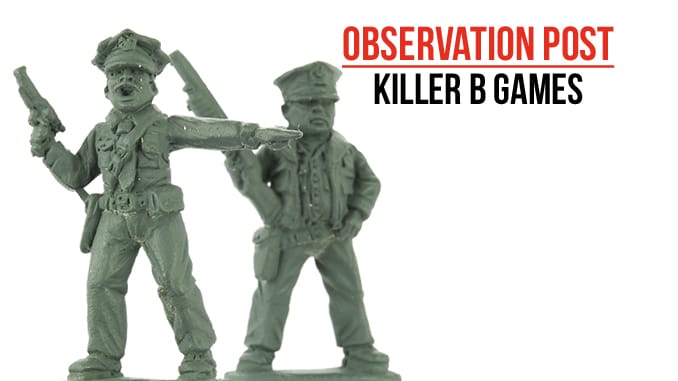 Killer B Games in the UK a range of 1950’s-style sci-fi figures called Invasion X sets that others have yet to offer. The range includes human cops, Venusians, Alien Spacemen and more. Like so many small wargaming businesses out there, the ranges on offer have some hidden gems, many of which are unique in a marketplace packed full of similar ideas.

Craig Rowlings, owner, very kindly sent a relative sample of packs for us to review.

The first pack is 5 Saucer Men of Venus. These are cyclopean people in suitably retro alien spacesuits, armed with raygun-style laser pistols. These are suitably dangerous looking individuals who care little for the affairs of insignificant humanity.

Following the Saucer Men of Venus comes the Venusian Emissary, clad in his full regalia as he arrives to discuss either an alliance with or the surrender of the human race. The figure could also be used as a VIP to be rescued, kidnapped or even destroyed.

Next is a pack of the type of heroes that are a staple of 1950’s and 60’s sci-fi, the Boy and Dog, most likely to be the first to notice the alien invaders but is then ignored by the authorities. In baseball cap and zip-up jackets, the young chap and his mongrel are full of character.

Finally, we have the very authorities who would dis-regard the above or find themselves in a sudden encounter with invaders. The Police Chief and Deputy are clad in the type of police uniforms found in most small towns, one with a revolver pointing, the other standing in classic ‘come at me’ pose with a pump action shotgun.

The level of sculpting and overall ‘look’ of the miniatures is almost straight out of the very TV series and movies they are designed to represent. This makes them perfect for gaming those ‘classic’ Cold War-era encounters where the enemy might be Russians or aliens or, perhaps even worse, alien Russians.

Killer B Games and their US stockist, Recreational Conflict, have a number of different packs and offer a variety of different ranges beyond this one. Take a look at the new website and see what you can discover.