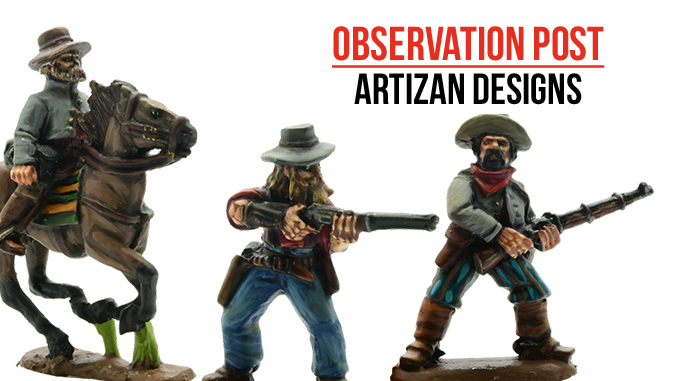 Artizan Designs and North Star have released new sculpts designed to be used as Confederate irregular, guerilla or similar renegade cavalry in the period before, during or after the American Civil War.

Throughout the Kansas-Missouri Wars, Civil War and post-Civil War era, many individuals and groups fought on behalf of their ‘States Rights’, for plunder or just for the Hell of it. Clad in a mixture of civilian and military uniforms, they rode out not so much as cavalry as mounted infantry or light horsemen, using a mixture of pistols, shotguns, carbines and even full sized muskets.

Each miniature is offered in a mounted and dismounted version in the same blister. These look like desperadoes, the type of men who’ll fight hard and dirty from horseback or on foot. The overall quality of the sculpting is up to the usual high standard to be expected from Mike Owen, who excels at creating tabletop characters. These figures cry out for careful base colour painting and the use of washes to enhance the details.

These figures are a worthy addition to the Artizan miniatures available from North Star. Although there are only four packs, a mixture of the poses and perhaps the odd head swap would provide a suitably disreputable group of secessionist types. Whether they’re riding across a battlefield at the charge or robbing the local bank, these are great miniatures.