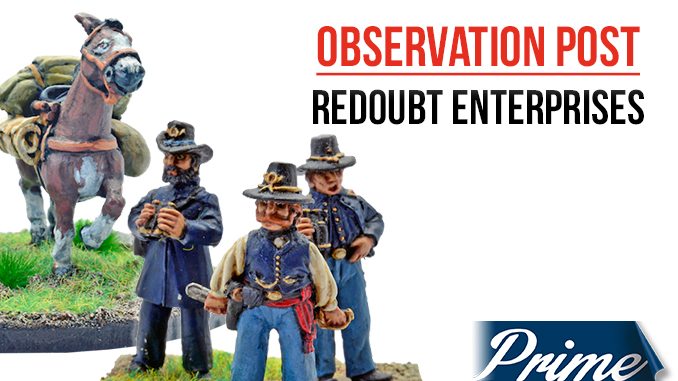 The never-ending machine that is Redoubt Enterprises have yet more great releases from across their vast ranges.

First, we have some very useful European civilian casualty figures, ostensibly for the Boxer Rebellion but also useful for right up to the Boer War or even into World War Two. There are six figures in each pack, three wounded and three dead. They all wear fairly generic clothing for the 19th or 20th Century and have a variety of weapons, with some having bandoliers. They’d make good disorder markers for certain rulesets or work well as a method of recording wounds caused.

The next two packs are also fairly generic and useful for a number of periods. We have two pack mules and two camels, useful as baggage animals or in games where the need to represent new or additional supplies are required.

Finally, we have two packs of American Civil War Generals, with three figures in each. One pack is sculpted to represent Union officers and the other Confederate but they could both be used for the same side if required. A couple of the generals appear to have been modeled upon well-known personalities from the war but are still fairly generic on the whole.

With such a wide variety of ranges, Redoubt’s is a good website to browse, although it is a little ‘clunky’ at times. However, these are great additions to the ever-expanding variety of both generic and specific miniatures that may be found stocked by this venerable company.