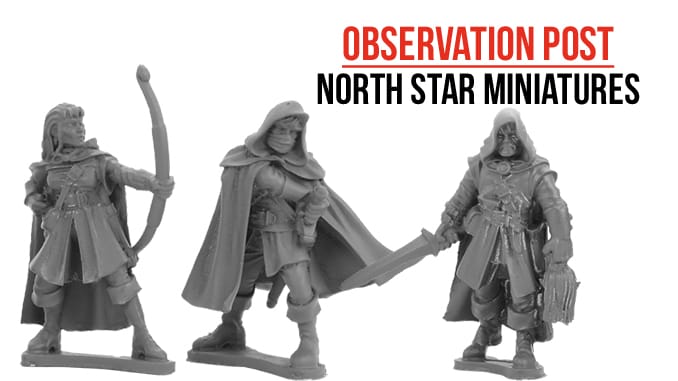 North Star Miniatures are offering ‘official’ figures to support the Rangers of Shadow Deep game, a solo and co-operative tabletop miniatures game by Frostgrave author Joe McCullough. Players create their ranger, gather companions, and play through a series of missions in their fight to hold back the darkness. If their rangers survive, they will grow in power and ability, and be sent on more difficult, dangerous and intricate assignments. Currently only available as a PDF, it is hoped that a print version will be available soon.

There are three packs available in this small range, representing potential characters and a rather disgusting enemy.

ROSD01 – Rangers of Shadow Deep 1 contains two Ranger figures, one male and one female. Both wear cloaks with hoods. The young female ranger holds two short swords in a ready pose, whilst the older male ranger holds a sword in one hand and carries a severed head in the other.

ROSD02 – Rangers of Shadow Deep 2 also contains two Ranger figures, this time a female with bow posed in the action of aiming or firing, and the other a cowled and masked male in the process of drawing his sword.

ROSD03 – Giant Flies consists of four rather gross looking Giant Flies, akin to the blowflies that plague many across the world.

Although all these figures are designed to be used with the Rangers of Shadow Deep rules, they would obviously have uses across many others. Perhaps the most generic are the Giant Flies, which could feature in fantasy and science fiction backgrounds galore. Sculpted by Bobby Jackson, these are well worth checking out as they ooze character and, in the case of the flies, possibly other things as well…