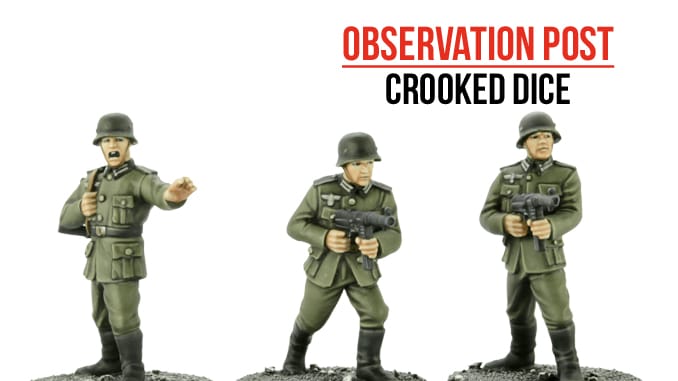 Crooked Dice have recently added to their burgeoning Pulp era range with two new packs of movie inspired miniatures that could well feature in historical games as well.

One of the main features of 1930s and 40s pulp and pulp era derived movies, television and stories is the rise of the ‘baddies’ in the form of the Nazis. Like any villains, there is a need for suitable minions to carry out the bidding of the masters. In the case of the Nazi menace, these minions take the form of the uniformed Nazi troopers, the expendable extras.

The first pack contains 4 metal miniatures designed to represent standard Shocktroopers, in the pre- to early World War Two grey uniform and jackboots. Every trooper wears the easily identifiable helmet and carries an MP40 Sub-machine gun. One of the figures could double as an NCO as his weapon has been slung on his back and he is pointing.

The second pack also contains 4 metal miniatures, However, this time the figures wear the tropical uniform as seen in the Afrika Korps. All have desert goggles or sunglasses, and the KAR 98K rifle is predominant. Again, we have two particularly characterful sculpts, one smoking a cigarette and the other in officer’s uniform with binoculars and a Mauser pistol.

Like all the Crooked Dice sculpts, these are packed with character. Plus, although designed for use within the pulp era, they would make great HQ character miniatures or a special unit for use with World War Two rules. For those into pulp gaming, there are more releases planned for later this year, in support of the 7TV: Pulp rules system.