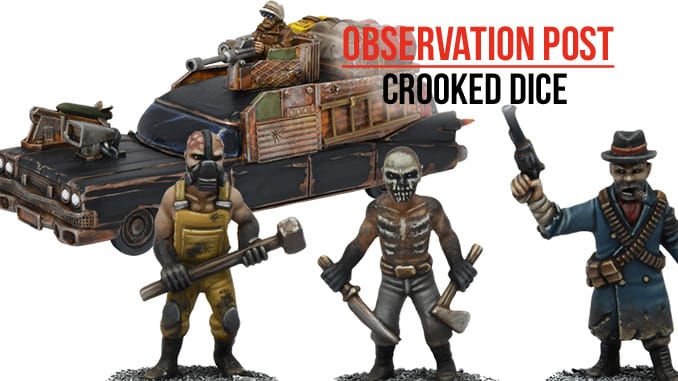 At the recent ‘Other Partizan’ show in Nottinghamshire we called by the Crooked Dice Game Design Studio stand, as ever they had a cabinet packed full of painted new and forthcoming releases. Yet more figures and vehicles for their planned 7TV: Apocalypse boxed ruleset have been on show recently with new resin stowage, turrets and armour, a ‘Super Mini Cooper’ rigged for the Post Apocalypse environment and the Anthill Boys, a diminutive but deadly gang of half alive psychopaths who inhabit the wastes.

In amongst their ranges are a number of resin vehicles, such as a Ford Transit van, Landrovers, Minis, a Humvee and a large US style ambulance. Well, all these miniatures may now be customised for the Apocalypse of your choice, with a set of resin pieces that may be added to the kits. These include stowage, armour plating, weapons, turrets and gunner figures. These have all been used on the vehicle shown here. Of course, these same parts may be used on other vehicles, whether resin, plastic or diecast, to ‘pimp’ your PA ride.

Not to be out-done, there are pre-prepared packs of PA vehicles on the way. The first were resin and metal versions of buggies and trucks, followed by sets of resin cars, which came with customizing parts. The most recent however, is much more extreme, a Mini Cooper with an enlarged, armoured axle and a touch of the ‘Monster Truck’ about it, complete with a turret, weapons and a gunner figure.

Lastly, we have the stunted but deadly Anthill Boys, a seven strong gang of mutated, scarred individuals who are willing to take on anyone or anything to survive. Each warrior has a different weapon, and is led by a leader clad in the sacred raincoat and fedora handed down from ‘Don’ to don.

There are at least 100 new metal miniature releases planned to tie-in with the new boxset. There are more items in resin and metal designed to complement it, including resin signage such as that shown here. With a Kickstarter beginning in October, most of the releases are either already available or simply waiting for sufficient funding to produce them. So, get ready to choose your personal Apocalypse and see how well your Cast can survive!