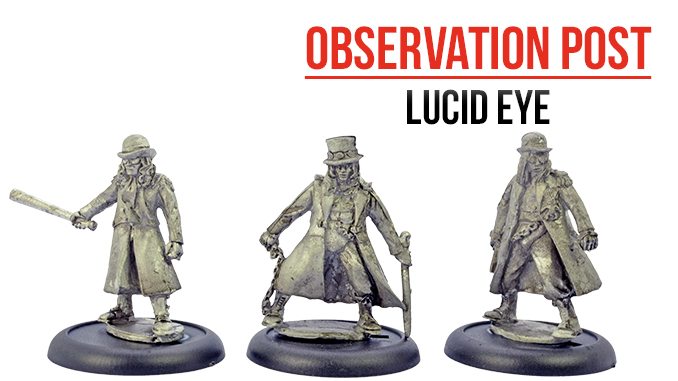 Lucid Eye continues to add to their range of miniatures for their Plot Device setting, adding more characters and factions to their repertoire.

Since the creation of the concept, the Plot Device has grown, with three distinct sub-sections or types of characters. These are The Ultrateens, The Suburbanauts and Encounters. Each of these consists of extremely characterful denizens of the pan-dimensional Empire.

The first pack we have for review is, confusingly, Ultrateens 2. These figures are gang members who populate the lower levels of society and are armed with various close combat weapons. Each is dressed in a trademark long coat but exhibits his own flair by his choice of headgear and clothing accessories. Although these may be seen as ‘rank and file’ street level warriors, there is a distinct sense of character in each of the sculpts.

The second and third pack is drawn from The Encounters part of the range, two named characters, Regal Vanguarde Pryce and Olga Blok. Pryce is a male character dressed in a suitably louche, 1970’s style, with a fine moustache and sporting a suppressed automatic in one hand and a cigarette and martini glass in the other. Olga is a female figure clad in almost stereotypical ‘Russian’ fashion, complete with fur hat and coat with a fur-lined collar for those hard Moscow winters. She wields a revolver, held aloft and perhaps ready to fire.

These figures are perfect for use as characters from your favourite literary multiverse and would fit into a range of game systems, from 7TV to Pulp Alley and more. As the latest releases from Lucid Eye, they are an indication of the direction being taken by the company as they work on their own rules to accompany them. Between these and the other miniatures on offer from this rapidly growing company, there should be something for anyone looking for something decidedly different.