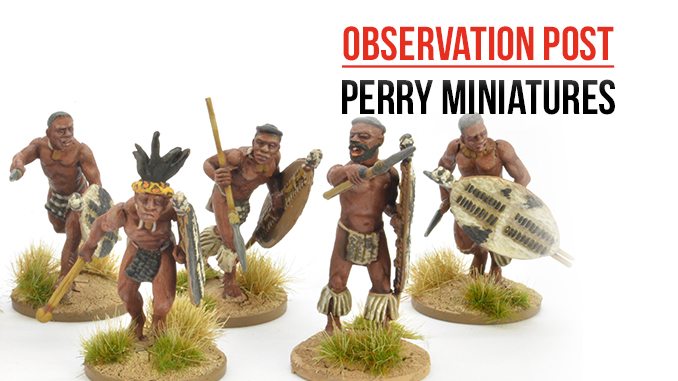 After releasing plastic British for the Anglo-Zulu War of 1879, many people asked an obvious question of Perry Miniatures: will you be making some plastic Zulus?

Well, the answer is yes, and here are two frames from the upcoming boxed set.

The first frame consists of five bodies in a range of attacking poses, all in ‘fighting kit’, minimal ceremonial regalia, with cow tails and loincloths. There are a total of 15 heads on the frame, so your 5 Zulus can represent unmarried youths without headrings, married men with headrings and either senior ranks or commanders with ostrich feather headdress. In addition, by using the latter heads only, it would be possible to field units from the Shaka Zulu period, when warriors went into battle wearing more elaborate ‘uniform’. The arm choices include the option to field warriors with the Assegai, throwing spear or knobkerrie war club. There are 5 shields, three with an arm or hand already attached and two without.

The second frame has 4 bodies, although one appears to be a prone casualty and two of the bodies require a little extra assembly. Again, there is a choice of married or unmarried warrior heads. The main focus of this frame is the choice of giving your Zulus some firepower, in the form of matched pairs of arms which may be posed firing or loading either percussion or flintlock muskets or Martini-Henry rifles. Shields and a couple of throwing spears are also included on the frame, as is an arm with a hand clutching a powder horn and separate powder horn and ammunition pouch for a couple of figures. Muskets had been available in limited quantities all the way back to Shaka’s time and the Battle of Islandwhana in 1879 gave some Zulus access to breech loading weapons.

These plastic figures are well detailed and proportioned and would go together to create realistic poses. The option to use them as warriors from the early 1800s down to the Anglo-Zulu War of 1879 and possibly beyond make these extremely useful for a variety of gaming periods. There are 34 multi-pose miniatures in the box, with an extra 4 casualty figures. That works out to 10 carrying firearms and 24 with close combat weapons, a great ratio for building large units. Simple to complete and with plenty of detail, these are the plastic Zulus you need to grace your tabletop.

You can see painted miniatures below