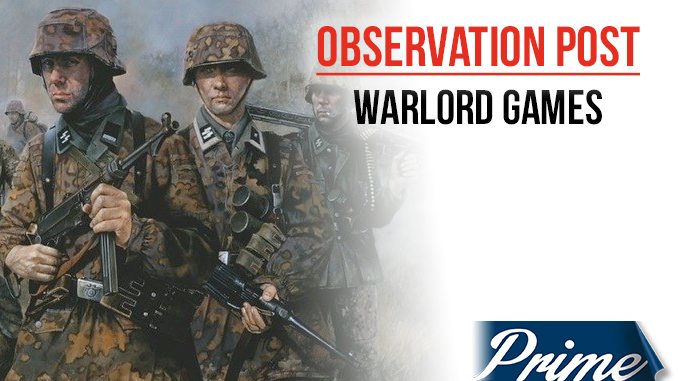 Warlord Games appear to have embarked on a ‘mission’ to create almost every type of World War Two combatant in multi-pose plastic. The upcoming Waffen SS boxed set adds these controversial troops to those available.

This test frame consists of six bodies, five advancing and one kneeling. All are wearing combat smocks and sport standard German equipment. There are a host of weapon options available, including the STG44, MG42, Panzerfaust, Kar98K rifles, MP40s and even a G43 carbine and a Mauser machine pistol. Some of these are part of pairs of arms but others are separate and may be added as carried additional weapons.

There are also a plethora of equipment options, from shovels to magazine pouches, canteens to bread bags and bedrolls, all suitable to be added to any of the models. Each miniature can be further customized by a range of head choices, from officers’ caps and Feldmutze to covered helmets and Handschar fezzes. There are hands holding maps, binoculars and stick grenades, hands carrying an ammo box or an ammunition belt to place around a figure’s neck.

The sheer amount of options available on this frame means that no two figures needs be alike. The quality of design and flexibility is a hallmark of the Warlord Games plastic range but each release seems better than the last. If you’re looking to create a force of varied troops of your very own, this is the latest in a long line of excellent choices.