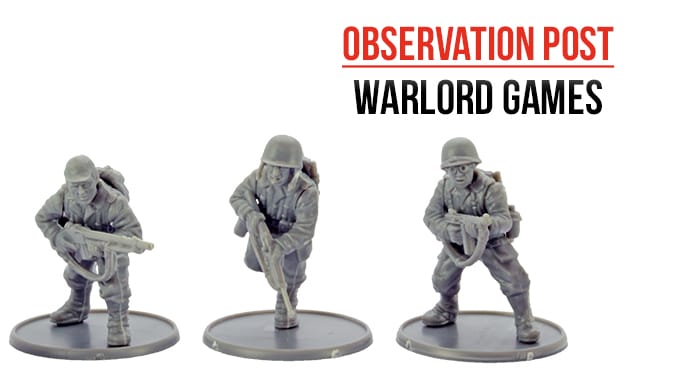 The new multi-part plastic US Infantry from Warlord Games are a much-needed update to the previous offering. Like the majority of Warlord’s more recent plastics, these are a top quality product in the Warlord style that offers the gamer a multitude of options.

These figures may be assembled in much more dynamic poses than previously available, plus they have new weapons such as the bazooka that may be fielded. They wear a uniform that was in use throughout the war, which pretty much means that they can be fielded for most of the European theatre of operation. A few simple conversions, like clipping off the forward pistol grip on the bazooka, and making sure your choice of weapons matches the year of service, allows you to field early war troops, like those found during Operation Torch in 1942.

Equipment and uniform colour choices are also a consideration. Early war US troops would have a greater homogeneity of uniform colours, with much of their kit being recently issued and more consistently ‘correct’. Later in the war, and certainly by the time of the Sicily landings, there would be more disparity of issued kit, fading due to use and slightly different shades.

If you really want to ‘place’ your GIs to a time period, the kit offers two choices of M1928 haversack, one the early war version with the M1910 entrenching tool and the later version with the separate M1943 tool. Perhaps a good tip for prolonging the tabletop combat ‘life’ of your figures is to not use the haversack at all, and pick weaponry which served from 1942 up to 1945, such as the M1 Garand, Thompson SMG and more. In that way, your figures cover most of the European war and won’t look out of place alongside Mid- or Late War Germans.

The set comes with decals, allowing you to field troops from the 1st Infantry Division, the ‘Big Red One’. These troops were a part of Operation Torch in 1942 and served as part of Operation Husky, the invasion of Sicily, plus fought in Italy and beyond. This means that the combination of careful weapon and equipment choices, plus the decals, provides green troops up to hard fighting veterans throughout the war. (An aside: I’d quite like to see rules for this in Bolt Action, taking a platoon-level unit and tracking its progress through a series of WW2 battles, a campaign system where troops improve, fall victim to wounds, get replaced, etc).

The decals set also allows you to field figures with rank badges, medic designation and even MPs, allowing you to put together a force drawn from different backgrounds and unit options. It is also possible to field these figures as Brazilian or Free French forces from D-Day onwards, as these were supplied with US kit and weapons.

Another great set of plastic miniatures for Bolt Action or other WW2-based rule systems, this is a useful addition to the range offered by the company. Plus, the quality of the plastics suggests that the upcoming 8th Army and DAK sets will be really fantastic.