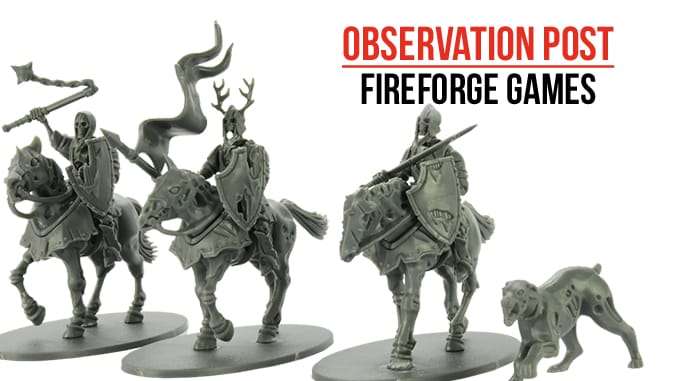 Fireforge Games have gone all undead with their latest multi-pose plastic miniatures. The new boxes allow you to field mounted and dismounted undead fantasy warriors, plus a horde of zombified peasants, all ready to aid in enacting the wishes of a fell Necromancer.

The first of the boxes received for review is entitled Living Dead Knights. This box allows the gamer to assemble a maximum of 6 skeletal mounted figures in ancient armour. These can all be armed with either a sword or a lance, or a mix of two figures with axes, two figures with maces or two figures with morning star.

There are also two very nicely done undead Rottweiler dogs and each skeletal horse has separate Barding so you can assemble the horses with or without it. The horses come as three different pairs of half-bodies with three different heads and three different tails, all of which match up with each other, which therefore allows you to potentially create 27 different horse positions.

There are a number of command options available, allowing you to assemble two leaders, two musicians and two standard bearers. This means you can buy multiple boxes, as few as three, and be able to field two units with command.

Each set of two frames comes with a choice of 25x50mm square bases or 60x32mm oval bases, allowing more choice.

The second box we have is Living Dead Warriors. These are zombified soldiers in various stages of decay, wearing the armour and uniforms of their past lives. The two frames of parts allow you to assemble 12 figures in total. The weapon choices on offer include spearmen, two handed spears, a total of 8 swords, two with war axe and two with war maces. The set also includes shield options and a nicely done beheaded figure option who carries the head under their arm. (Although, Romero Rules?)

The Command options available allow you to assemble two leaders, two musicians and two standard bearers so, once again, a few boxes give you two decent sized units. The set comes with 20mm square bases or 25mm diameter round bases, so the figures can be ‘ranked up’ or used for loose skirmishing.

Lastly, we have the most characterful of the three boxes, the Living Dead Peasants. There are three frames in the box, allowing you to assemble a total of 18 figures. As befits a horde of civilian style zombies, the weapon options are suitably ‘peasant-like, with pitchforks, cleavers, scythes, hoes, shovels, big axes and butcher knives. Nine of the figures may also be modelled with open hands.

The head and body options here are suitably diverse, with male and female undead and a great head sculpt where a raven or crow is in the process of plucking an unseeing eye from its socket. These figures also come with both 20mm square and 25mm round bases.

Designed for use with Fireforge’s Forgotten World setting, these would be useful for a whole variety of ‘classic’ pseudo-medieval fantasy games. Another set of great releases from a company who fills the gaps that others no longer wish to do so.