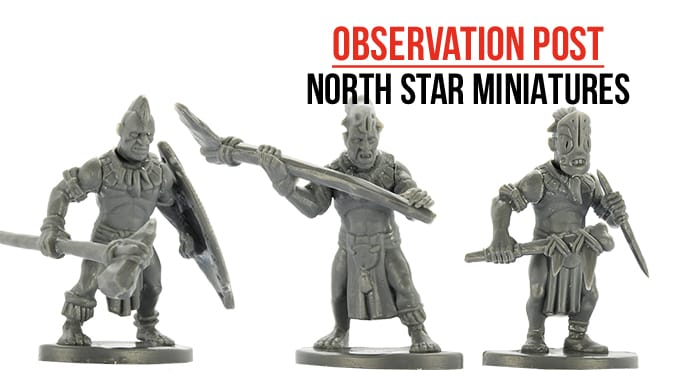 North Star and Osprey Games have produced a new plastic boxed set of Tribal Warriors. These are designed to be used with the Ghost Archipelago fantasy adventure rules.

The Tribal Warriors in the boxed set are designed to represent the various tribes that can be encountered across the Archipelago’s islands. Consequently, these multi-pose plastic figures have a touch of the Polynesian about them, albeit with fantasy overtones. They are designed to be both adversaries of the Heritor’s and their Crews, whilst also functioning as a distinct group themselves.

Each frame consists of five bodies in different poses, a choice of ten different heads, nine arms with primitive stone and wooden close combat weapons, two blowpipes and bows. There are also two wickerwork shields and, a nice touch, five tribal masks which may be placed on any of the heads.

There are five frames in total in each box, allowing for the construction of 20 figures. The range of possible options within each box allows for the creation of many different poses, allowing for a great deal of variety in each unit.

Although designed to be used as fantasy figures within a particular setting, these figures could double up as pre-contact tribesmen before the arrival of Europeans, making them a reasonable option for historical games. Once again showing the flexibility of multi-pose miniatures, especially those offered in plastic, these are a great addition to those sets already on the market.