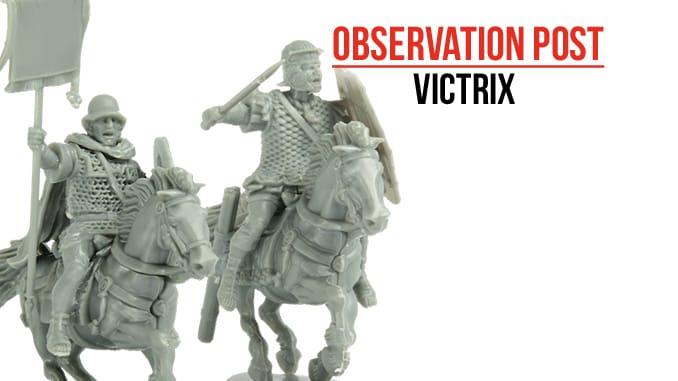 Victrix have established an enviable reputation for offering top quality multipose plastics. The latest releases are for their Roman ranges, which cover both the Republican and Early Imperial periods.

The Republican Roman Cavalry consists of 16 mounted figures in each set. All are armoured with chainmail and muscled cuirass and have separate heads, including Etruscan helmets, allowing for multiple variants. There is also a choice of arms which can be armed either with javelins, spears or swords. Other options include musician and standard bearer arms, plus optional cloaks and round shields

Some figures can be converted into Carthaginian cavalry with a little work and the correct choices of armament, etc.

The Early Imperial Roman Cavalry set also contains 16 mounted figures, this time all armoured with chainmail and scaled armour. The separate heads include feathered helmets/crests for NCO, plus the option to represent Gallic or German warriors in Roman service, complete with suitable moustaches.

Again, there is a choice of arm, with javelins, spears, swords, musician and standard bearers all being possible. There are both oval and hexagonal shields, with the hexagonal shields for Praetorian or Gallic/Germanic options. Extras include javelin cases, separate water bottles and bedrolls to give troopers a “campaign” look.

In company with all Victrix’s figures, these have been digitally designed, maintaining the tradition of highly detailed figures. They are also great value at £29.95, cheaper than most metal sets and more highly detailed. Little Big Men Studios have produced shield transfers for both of these sets, saving time in regard to detailing after painting. Another great release from the company, with Celtic, Germanic and Gallic warriors all on the way to fight them, followed by Saxon Fyrd for the Dark Ages. Plenty of things to look forward to, with more to come no doubt!