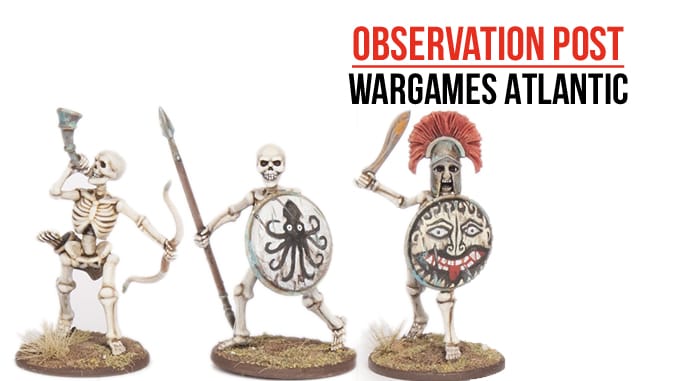 Wargames Atlantic have entered the plastic multi-pose figure market with two very different frames of figures. The Plastic Greek Undead offer something to the Greek Myth gamer, whilst the Raumjager could serve as sci-fi troops across a range of different games.

We’ve decided to focus on the frames, just to show what you get. The Greek Undead frame has a touch of the Harryhausen about it. There are three figures basic figures attached to bases and a fourth figure which may be assembled with suitable parts. They are well-rendered skeletons, quite thick at various points, making them far more durable than they could have been. The five heads include one in a full Greek helm, and weapon mixes include spears, a quiver and bow, a sword and plenty of shields.

The Raumjager frame is designed to fit with the Death Fields setting created by Wargames Atlantic, where troops from Earth are abducted by aliens and forced to fight in arena-like battles for entertainment. These are the first release for that setting, and have a slightly Germanic look in terms of weapons and equipment. There are parts to construct four figures in total, including one kneeling. Weapon options include assault rifle-like standard issue, plus flamethrower, sniper and squad support weapon. There are 9 heads on the frame, both male and female, although the helmeted and masked heads could be any gender! A command figure is also an option.

These are very nicely done plastics, pleasingly ‘chunky’ and therefore perfect for tabletop use. Future releases are planned for both concepts, with my favourite being the upcoming French in Napoleonic uniform. Well worth a look, and nice to see different plastics on the market.