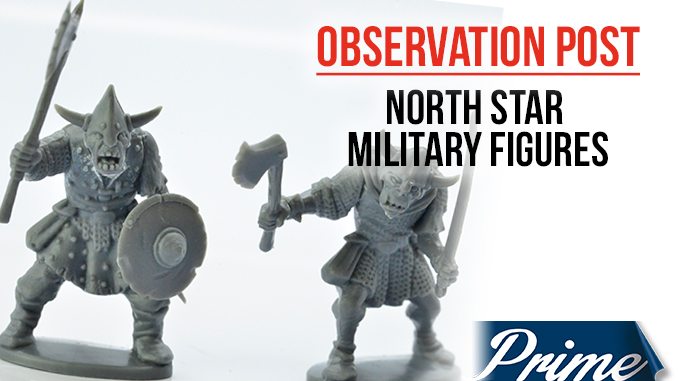 North Star Military Figures and Osprey Games have teamed up once again to bring a new set of rules and supporting miniatures onto the market. Oathmark is the name of the rules and the miniatures will be available in plastic and metal. We got our hands on one of the TEST SHOT frames of plastic Goblins, part of a new range with a nod to an old aesthetic.

These plastic goblins are most definitely NOT caricatures, owing much more to the writings of Tolkien than a Saturday morning cartoon version. It’s a phrase that gets bandied around quite a lot but ‘Oldhammer’ is usefully descriptive here, a design style that largely pre-dates the comedic glee of certain manufacturers. These goblins look pretty evil, and seasoned warriors to boot.

The frame itself contains simple to assemble multi-pose miniatures, five bodies in suitably varied dress. There are also eleven heads to choose from, ten ‘basic’ and one ‘commander’ (he gets the helmet with the biggest horns), plus some suitably nasty looking scimitar, axe and mace wielding arms, arms with spears, shortbows and quivers, arms to take shields and the parts to make a standard bearer.

In just this one frame, there is a wealth of options. The rules aim for a mass combat experience, so those options are required. With five frames in each box, it should be fairly simple to put together a unit or two, and then use the spares from one box to perhaps create larger units of specific types. In addition to the goblins, the planned releases include dwarves and elves, with more races rumoured.