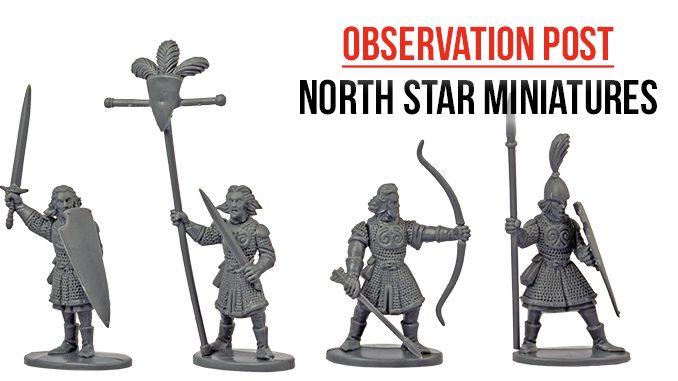 Thanks to a partnership between Osprey Games and North Star Miniatures, fantasy gamers have a great deal to look forward to. Designed to compliment the upcoming Oathmark mass fantasy battle rules, these Elves are the latest release from a range of fantasy figures with a ‘classic’ look.

Each plastic frame contains enough parts for you to build five Elven infantry. There are six frames in each box, allowing you to build thirty elves. There are a number of weapon options to create them all as spearmen, with hand weapons and shields, as archers or any combination of the three. Each frame also contains standard bearer and officer options, plus there are two sets of heads, one with helmet and one set without. There are also feathered plumes which may be added to the helmets. These figures have a touch of the ‘Tolkein-esque’ about them, an acknowledged intention of the overall range.

The box comes with thirty plastic Renedra bases, allowing you to put together a unit of individually based warriors. The obvious flexibility of single basing is well known, but it could also be advisable to get hold of some unit movement trays to ease play. Standard plastic glue may be used to build these figures. There will be flag and shield designs available from North Star to add to the figures, specially designed by the team at Little Big Men studios.

So far, the Oathmark range consists of Dwarves, Goblins and these Elves, the latter being released at Salute 2018. The initial releases are designed to represent medium troops, with the promise of heavier and lighter troops in the future and possibly cavalry. There are also metal miniatures for characters and commanders available. For those looking for high quality plastic miniatures with a fantastical bent, and a more ‘classic’ appearance, these are a great option for anyone looking to build up an army.