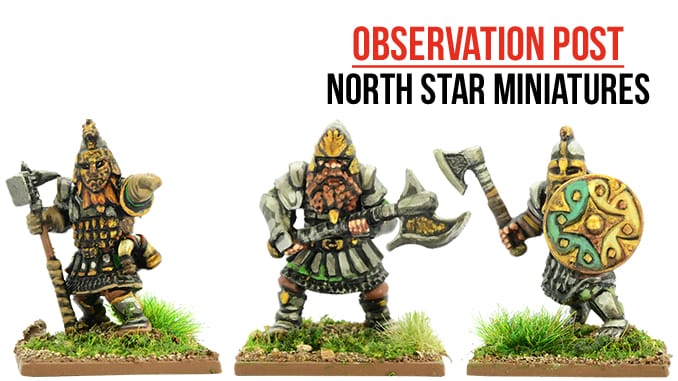 Designed to be used in the forthcoming tabletop wargame from Osprey Games, Oathmark: Battles of a Lost Age, these multipart plastic miniatures from Osprey Games and North Star provide top quality Dwarven warriors for any fantasy background.

This box set contains enough parts for you to build 30 Dwarf Infantry.  There are enough weapon options to give all the figures with 2-handed weapons or all with hand weapons and shields.

Each frame also contains a standard bearer and officer option. This allows gamers to create a giant unit of 30 Dwarf Warriors with an officer and standard bearer, or six units of 5 Dwarves with mixed weapons and a standard/ officer each.

There are two head options provided, one option uncovered with beards and the other with armoured visors. The armoured visor option pretty much epitomises the concept of ‘heavy infantry’.

Each box also contains 30 plastic bases, which are 25mm square, manufactured by Renedra.

The figures are supplied unpainted and in kit form. They are great figures, reminiscent of the ‘classic’ miniatures of the past and have a touch of the ‘Tolkein-esque’ about them.