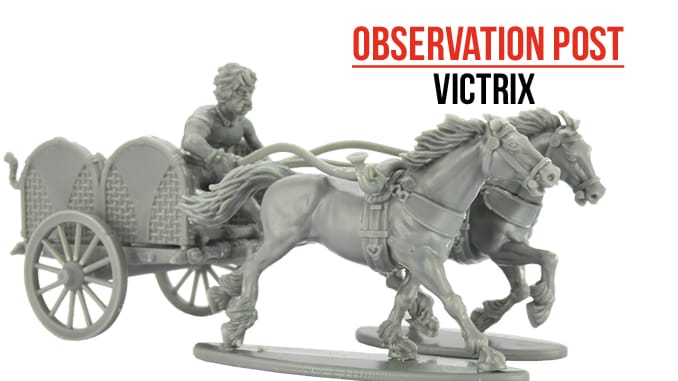 Victrix have added Celtic War Chariots to the Ancients range. These are plastic kits, with a host of options and extras included on the frames.

There are three chariots in each set, which gives you plenty of opportunity to customize your ride as desired. In total, there are eight Armoured Gallic infantry which may be used as fighting crew. If you’re looking for that Ancient Briton look, there are also three  Drivers, three Boudiceas and three druids included, all with separate heads, therefore  allowing for the creation of multiple variants.

Each chariot has a choice of sides, plus severed heads, javelin cases and ribbons to enhance them. These options allow for the creation of ‘command’ and ‘attack’ chariots, with a choice of arms for javelins, swords and a standard bearer, plus a mix of Gallic shields to protect the occupants.

The kits are designed to represent both Gallic and Ancient Briton chariots which were used against the Romans. They are fully supported by a range of shield transfers from LittleBigMenStudios.

Victrix is at the top of their game at the moment, producing some of the best, digitally sculpted plastic Ancients on the market. They are constantly pushing the boundaries of what is possible in plastic multi-part miniatures and are increasingly setting the standard that others should follow. They have Dark Ages ranges in the works right now, and are only short on digital sculpting talent when it comes to dominating these and other markets. Any experienced or trainee digital sculptors out there, get in touch and be a part of a winning team.