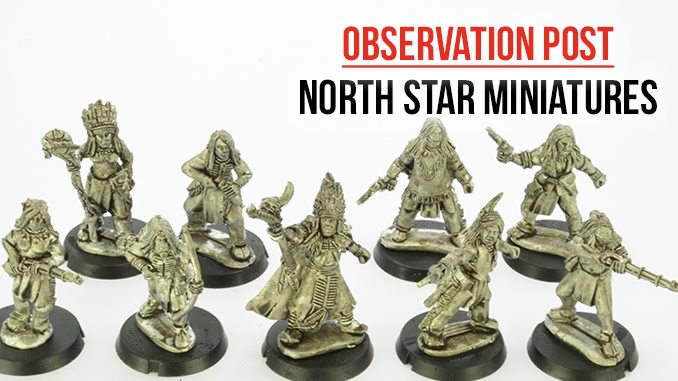 The Dracula’s America: Shadows of the West rulebook has at its heart a set of Wild West rules which work for ‘standard’ games between different groups. However, the core rulebook also contains an entire Weird West background with Dracula and his minions in charge and factions vying for their own objectives. The first supplement, Hunting Grounds, adds to the rules and this Weird West background with new weaponry, supernatural elements and Posses. These new Posses include some drawn from the Native American tribes and acting as Skinwalkers, shapeshifters and magic users.

This posse includes eight Native American Gunfighters (five with pistols, two with rifles and one with a bow). One model is in a War Bonnet to represent your Posses’ Boss and another wears the paraphernalia of a Shaman, a Skinwalker Arcanist. All the miniatures are dressed in traditional dress, although some wear elements of European dress, and equipment such as pistol holsters.

These are cleanly sculpted and very characterful miniatures, with a number of uses. These figures would also be suitable for The Curse of Dead Man’s Hand, In Her Majesty’s Name or more historically based Wild West games. They are just one of the new releases that support the Hunting Grounds supplement and we look forward to seeing more in the future.