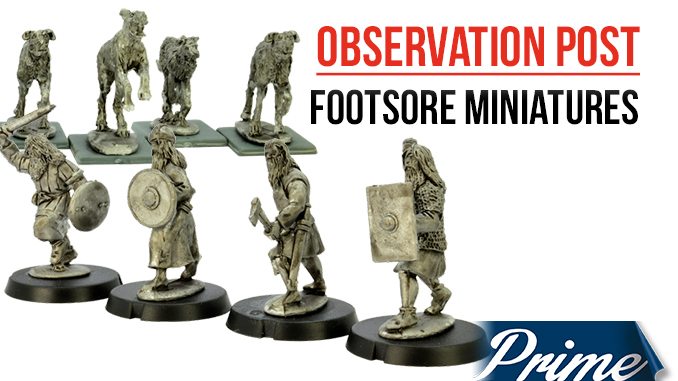 Footsore Miniatures continue to expand their ranges, with top sculptor Bill Thornhill churning out top notch sculpt after top notch sculpt. This time around, we take a look at some of the offerings from the Dark Ages range.

We’ve picked out four packs to take a look at, amongst them some of the most recent releases. Most of the packs contain four miniatures, although one is a little different, as we will see.

The first is PSC 101A, a pack of four warrior Nobles, all with helms and clad in different styles of armour and usable as either Picts or Scots. All of them come with shields and two of them have hand weapons, with one figure with a hand poised in mid-spear thrust and the other ready to defend, although one has to provide their own spear for each. These are hard faced, experienced warriors, all either in active poses or ready to leap into action.

The next pack is PSC101B, another pack of Pictish or Scottish Nobles but these have no helms and sport different or no discernible armour. One figure has two axes, the next is charging and about to strike with his sword and the other two are spear armed but, again, in need of spears. It’s worth noting that these two packs go together to make eight variants that may be included in a purchase of a pack of four, at least when purchased via the website.

Pack PSC106B is one of the two new packs of Pictish or Scottish archers, again with eight figures in total in the range but supplied as potential variants when each pack is purchased. These are attired in typical ‘peasant’ clothing of the period, although two of them have hoods that may be drawn over their heads. None of these figures sports a hand weapon, relying upon their skill with the bow and their comrades to hold back any close combat assault.

The last pack is PSC110 and depicts a pack of seven Warhounds and their Handler. The hounds are large, aggressive looking beasts in four different poses, either pouncing, running or ‘pointing’. The Handler is depicted in hooded cloak, running to keep pace with his charges as they head towards the enemy.

There are currently 10 packs in Picts / Scots range, with many more within the Dark Age theme. All these miniatures show evidence of a high degree of sculpting and appear to have been well-researched for accuracy of attire, weaponry and canine relevance! They would be a worthy addition for anyone with a suitable army or could form the core of a starter force with the addition of only a couple more.