28mm Perry Miniatures Release Round Up 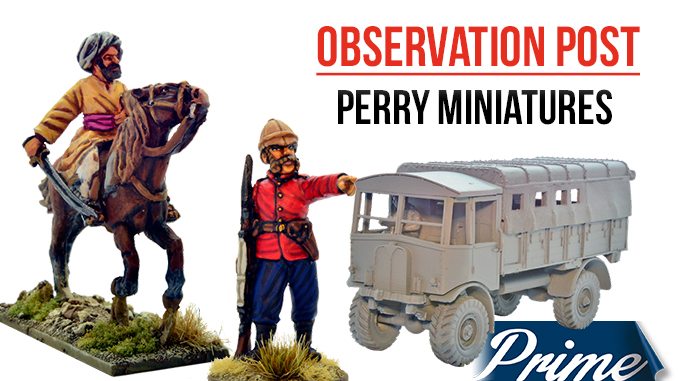 The prolific Perry twins continue to produce some of the finest 28mm miniatures on the market. This time around, we’re looking at some of their newest releases from across different period or theatres of war.

The first item is a Matador artillery tractor, used by British and Commonwealth forces throughout World War Two. This is a real beast of a truck, even at this scale, and really looks like it can tow those heavy loads.

Which brings us to the BL 5.5 inch medium artillery piece. This was designed to deliver high explosive shells upon the enemy, which it did with a great deal of accuracy. The set comes with a number of crew in suitably ‘in action’ poses.

Moving back in time, and in support of their Victoria’s Little Wars range, we have a collection of personalities from the Defence of Rorke’s Drift, that classic colonial action from the Anglo-Zulu War of 1879. These are all based upon images and description of the actual men concerned rather than the more Hollywood versions. All the most famous characters are here, Bromhead, Chard, Surgeon Reynolds, Hook, Scheiss, etc. Some of the pieces would make nice vignettes in their own right, especially Surgeon Reynolds treating a wounded man and Private Henry Hook helping a wounded comrade.

Finally, we have Afghan Cavalry for use on the North West Frontier during the age Victoria and possibly beyond. The miniatures represent the typical mounted tribesmen of the region, armed and equipped with everything he needs to harry the British Imperial invaders and survive when away from home.

Like all Perry releases, these figures are excellently sculpted and are in a variety of useful poses. As always, the eclectic nature of the ‘Perry Way’ means that we have no guarantees of more in the same ranges but, given the Twins interest in the periods they currently cover, no doubt many more great figures are on their way.