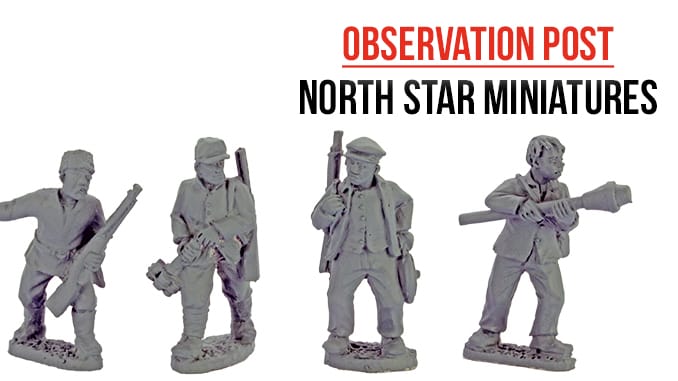 Available from North Star Miniatures, these Partisans are now part of the Crusader Miniatures range. In contrast to similar figures on the market, these are designed to represent typical fighters from the Eastern Front, armed with what they can get and dedicated to a cause.

These figures are fairly generic, dressed in parts of Soviet-style military uniforms or in civilian clothing. Peasant shirts, quilted jackets, flat caps and fur hats are all here. This provides the suitably ‘ad-hoc’ appearance of a typical Partisan band, often a mix of Soviet army personnel and civilians operating behind enemy lines.

The ad-hoc nature of the fighters is also shown in the range of different weapons being used. There are the distinctive DP-27s with their flat magazines alongside a captured MG34, PPSh sub machine guns along with MP40s and Panzerfausts and Panzerknacker grenades being fielded in an anti-tank pack which also has a figure with a Molotov cocktail.

These figures would be suitable for any World War Two gamer. With some judicious choosing of pack and pose, they could serve as partisans or resistance fighters from a number of other theatres, such as Greece, Crete or Yugoslavia. They are well sculpted and in suitably ‘active’ poses. Sold in sets of four miniatures, these are a useful part of the Crusader range and hopefully the start of a whole variety of models.