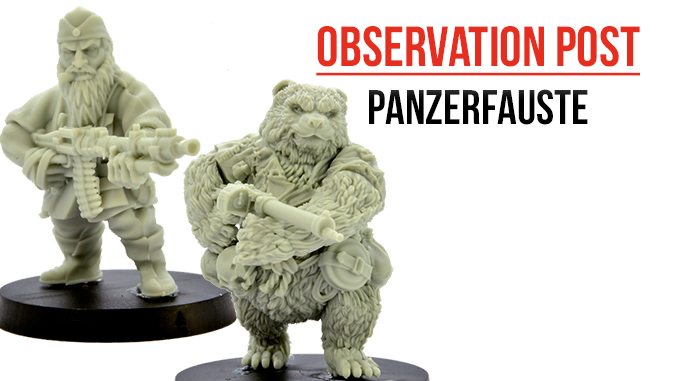 We featured Hysterical Games’ Panzerfasute rules and miniatures back in WI347 Raids! and you can download that article here. Since then, the company have continued to release even more World War Two figures with a unique fantasy twist!

The packs we have for review are a Dwarf Straftruppen Section and the Troglodyte ‘Wojtek’ Brute. Each faction is based upon the classic fantasy races but also those most associated with a particular nation’s myths and legends.

In the game universe, the Dwarves represent a suitably Germanic look, although they are led by a Kaiser rather than a crazed dictator. This particular pack is one of the more recent additions to the range, providing you with ten miniatures from the Straftruppen. Two of the miniatures are named Steiner and Dietz, giving you some sense of their intended origin. These are a mixed group of troops, some sporting classic World War Two Wehrmacht equipment and others in World War One Pickelhaubes or Jäger helmets. These are all characters, produced in resin but created by a process which has captured every aspect of the original sculpt. Some have more than one part to assemble but this is very simple. The details and undercuts here cry out for a quality paintjob but even the most challenged painter could use an undercoat spray, base colours and a dark wash of suitable ink or thinned paint to bring out so much.

The Troglodytes represent the Polish in the game universe. These are based upon traditional creatures from Polish myth. Each faction has a large creature, known as a Brute, that adds another level of support beyond the 20th Century weaponry of the basic troops. In this pack is ‘Wojtek’, the bear, armed with a heavy machine gun and with two handlers to aid him. Again, this is a great set of miniatures, cast in resin but full of character. ‘Wotjek’ himself requires some minimal assembly and looks great, with plenty of detail on the fur, etc. to allow painters to go to town. The two Trogs are also nicely done figures, with a suitable level of dynamism in their own right.

As you can tell, we’re big fans of these miniatures, not only from an aesthetic sense but also the unique approach to an overly crowded ‘fantasy’ races market. The background and suitable rules are a part of the Panzerfauste universe but these could easily be used with any World War Two ruleset. If you want to be different and are tired of the same old clichés, take a look at the rest of this range and take the plunge into a new realm of warfare.