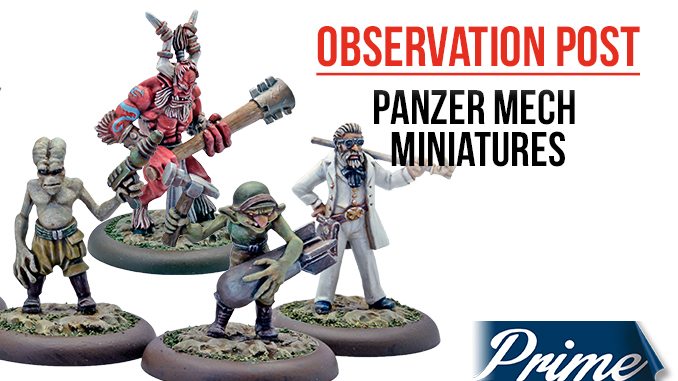 West Wind Productions recently ran another successful Kickstarter campaign to add new items to their Weird War II range, spearheaded by their Secrets of the Third Reich rules and miniatures line. They’ve added a range of Panzer Mech 1/56th scale ‘walking tanks’ to the range, which will be available to all as soon as the Kickstarter backers have had their items.

The miniature shown here is a Sherman Mech, mass-produced for the allied forces and with an obvious design lineage. With a pair of 76mm cannons, smoke launchers and a decent speed across ground, this is a weapon designed to engage the enemy full on.

Next we have the stretch goal miniatures, consisting of a Japanese Oni demon miniature, the Southern gent Colonel Kenneth T. Tuckey and his associate Gary Grey, Uncle Earle with his large caliber pistols and Bomber Bob the Gremlin.

These characters and many more feature in the Panzer Mech rules supplelemnt for the current edition of Secrets of the Third Reich. Backers at the correct levels will receive Dossier X-01 to help integrate the new miniatures into the game. A number of other items were unlocked during the campaign, including troop options for Weird war forces for the Pacific Theatre and much more.

However, if you weren’t one of the lucky backers, you won’t have too long to wait before you can get your hands on a host of new miniatures. The Kickstarter should be fulfilled by the end of 2017, meaning that these goodies will be available as of January 2018. So, start saving that Christmas money now and get stuck into yet more Weird War goodness from the folks who helped start it all, West Wind Productions!