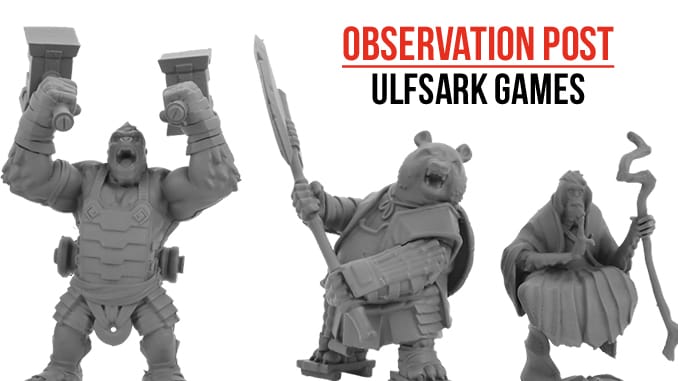 Ulfsark Games are a small, new company with a fairly unique range of 28mm ‘heroic’ scale miniatures. Depicting anthropomorphic animals with an oriental setting twist, these are something different on the market place.

The miniatures are designed to be used with the Taiyō Dynasties rules system,  wherein players take control of small warbands and play out character-driven skirmishes rich. A warband is made up of Heroes, Elite Units, Troops and other unique characters. With only 5 to 12 models in each warband,  games will be fast paced, with each character having an essential role and their loss having a significant effect on the overall outcome.

Taiyō Dynasties’ models are 28mm heroic scale miniatures, standing between 32-60 mm tall and cast in high quality resin. Some assembly and painting is required, but the material used to create the range means that they may be assembled very easily with ordinary superglue.

These particular models are intended for use in the War of the Falling Petal starter set but are also already available in separate warband box sets. Each box set contains dice, tokens, bases and character cards for the models.

These are characterful, well-sculpted miniatures. The concept behind them is unique enough to fill a niche within the marketplace, albeit a fairly small one. At the time of writing, the company is waiting upon the result of a Kickstarter campaign to fund production of more figures and a boxed game, but already offers for sale the figures shown here as part of warband sets.