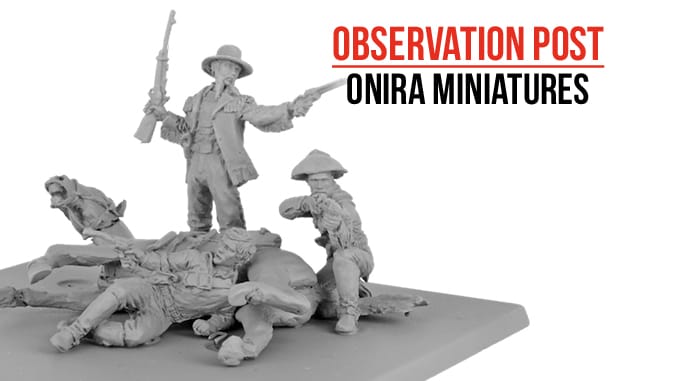 Oniria Miniatures have a unique style, aided by the efforts of amazing sculptor Angel Terol. They have recently embarked on a new series of sculpts which focuses upon their first ‘love’, the historical and movie versions of the Old West.

The set we have here is entitled ‘A Star Or A Coffin’. It is based upon is Lieutenant William W. Cooke, whose body was found close to his commander. He was the author of the famous ‘last message’ to Frederick Benteen, carried by Sergeant John Martin, that read: “Benteen. Come On. Big village. Be quick. Bring packs. WW Cooke. P.S. Bring Packs.”

Consisting of 4 figures, three US Cavalrymen and a downed horse, this is a fantastic vignette which depicts the last defence of a surrounded group of men. However, they would work as separately based figures, bringing something different to the average tabletop. The quality of the sculpting is excellent, with more than a nod to reality rather than the caricatured style often found elsewhere. These have an unmistakeable excellence in execution that make them both a great collectible for a history enthusiast or a wargamer alike.

This series will eventually comprise of 5 sets dedicated to the Battle of the Little Bighorn. In total there will be 15 figures plus 4 horses, depicting the fate of the 7th cavalry on the fields of Montana.

Whether you consider them great vignettes or gaming pieces, it can’t be denied that the Oniria Miniatures ranges as a whole are excellent. Our Stetsons are off to this company and to sculptor Angel for their efforts to bring such marvellous miniatures to the market.