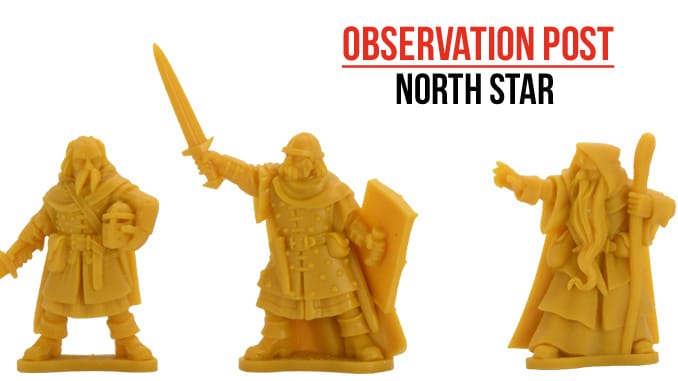 The release of the Oathmark range of miniatures by North Star and Osprey Games has most recently seen plastic, multipose Human infantry with a fantasy theme. Of course, any army needs leaders, and the next release for the humans is designed to rectify that problem.

There are six new metal character miniatures being released, mostly male but with one female. We have warriors and wizard, armed with an array of suitable ‘weapons’ (even a Wizard’s staff is a deadly weapon!) and wearing various styles of armour, including leather with steel plates, thick clothing and many with shields. All of these match the styles found in the plastics boxed set.

Every figure is extremely characterful, ensuing that they will stand out on the battlefield. They could easily feature as heroes in an Oathmark army, perhaps as lone warriors, at the head of a unit or even as force commanders.

They could also be mixed and matched and used together to form command units or even as the basis of an adventuring party for fantasy gaming in general.

As always, the miniatures themselves are excellently sculpted and are perfect for the intended purpose. The range of options for the eagerly awaited upcoming Oathmark game is also increased, adding Humans to the Elves, Goblins and Dwarves previously released. Cavalry is rumoured to be on the way fairly soon, and we look forward to seeing more releases in the future.