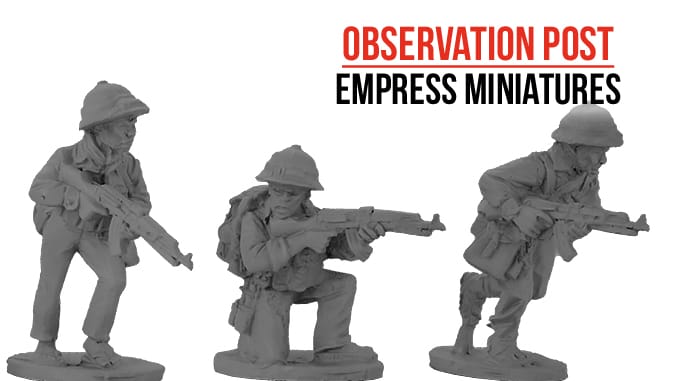 Empress Miniatures continue to push forward at a far pace with their Paul Hicks sculpted range for the ‘American War’ in Vietnam. Having started with the US Marines, they have branched out to include the Communist forces who sought to unite the two parts of Vietnam.

Both packs of figures contain 4 figures in total. The RPD LMG pack has one standing firing, one kneeling, a figure prone firing and one figure on the move carrying his weapon. Each base has a bipod cast onto its base, with some minor assembly required. Weapons and equipment are typical of the time, with three of the figures wearing the NVA pith helmet.

NVA4 has a kneeling, advancing, running and firing pose, all with AK47. Weapons and equipment are well represented, and two of the figures wear rucksacks. The chest rigs are also typical of those that were used, with large magazine pouches.

The speed at which Paul Hicks is able to turn out sculpts is phenomenal, with his use of ‘dollies’ meaning that a change of weapon, twist of a pose and added equipment equals a similar but suitably different miniature. In this way, Empress are able to put out a rapidly expanding range of figures within the current theme, the Tet Offensive of 1968, which have a coherent ‘look’ rather than an individualistic, unique one. Future plans include Army, Air Cav and ARVN figures, plus others.