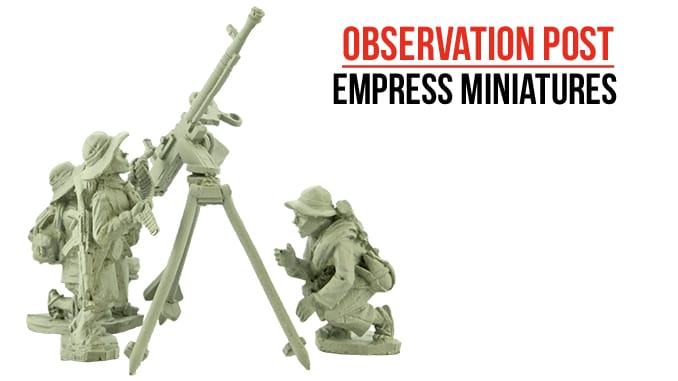 One of Empress Miniatures rapidly expanding ranges is that for the Vietnam War. Having begun with the Battle for Hue 1968, the wider war is slowly being explored, and the further into the war one goes, the more support weaponry is needed.

Hence, the two packs reviewed here. The first pack consists of two SG-43 Goryunov medium machine guns and teams. One of the crews is lying prone and posed ‘in action’, with the gunner and loader using their weapon in attack or defence. The second is a team ‘on the move’, carrying ammunition and personal weapons whilst pulling the wheeled machine gun behind them.

The second pack represents a DSHK heavy machine gun deployed as an anti-aircraft gun on a tripod. What makes this excellently sculpted weapon even more interesting is that fact that the three-person crew are all female, with a loader, spotter and gunner, all in floppy hats and sandals. The gunner has what appears to be a US Army pack on her back and the other crew members have AK47s.

The quality of sculpting on these figures is great, with some nicely realised equipment and uniforms counter-pointed by the elements of characterisation of pose, facial expression and the way the crews work together as a ‘single’ piece. These look like soldiers, doing their job, as best they can. Paul Hicks has done a great job on the figures here, and my hat is off to the sculptor of the crewed weapons themselves.