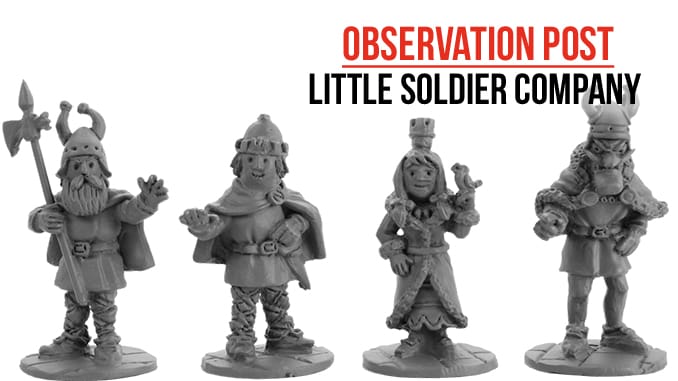 Smallfilms and the Little Soldier Company have got together to produce figures based upon the childhood of many a 40-something gamer, along the way producing some pseudo-Viking characters and replacement miniatures for a boardgame.

They say that ‘nostalgia ain’t what it used to be’, but I would beg to differ. The glorious days of TV past offer at least a warm glow regarding often half-remembered shows and series of the past. For those raised in the UK during the 1970s and ‘80s, certain shows stand out in the memory even now – Ivor the Engine, Clangers, Bagpuss and, lastly, Noggin the Nog.

Noggins the Nog was a strange little programme, with some unique animation styles and interesting take on Viking Age history, a world where the Prince of the Northmen (Noggin) and his friends existed alongside dragons, flying machines and more.

The ability to game using miniatures of such characters as King Noggin, Nooka, Knut, Graculus, Ronf, Thor Nogson, Olaf the Lofty and the reasonably naughty Nogbad the Nog probably didn’t occur to many children at the time, but that’s the joy of nostalgia and gaming, sometimes they collide in fine style. Hence this boxed set of miniatures from the Little Soldier Company, 8 miniatures based upon the named characters above, actually designed to use with Nick Case’s Tales of the Northlands boardgame

All of the miniatures are exact 3d copies of the 2D characters, capturing the fundamental nature of each one. The figures themselves are cast in metal and have some nicely sculpted details, even down to the ties on leggings and the feathers on Graculus the green bird. They’d make an interesting addition to a Viking or Norse force, a nice command unit for a fantasy army or even a present for those gamers ‘mature’ enough to remember them.

These are a nice set of miniatures that capture a certain part of a childhood innocence dimly remembered. I look forward to seeing the Clangers and Professor Yaffle from Bagpuss at some point in the future, ready to join the ranks or be turned into a display for the rheumy eyed to view.