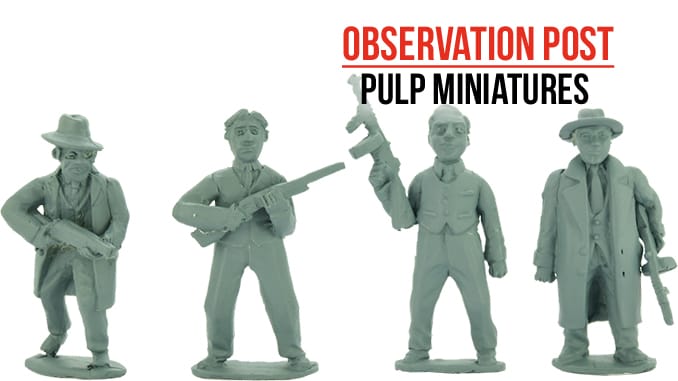 New company Pulp Miniatures (not to be confused with the similar sounding Pulp Figures) first foray into figure production offers something new, moving away from the world of the Chicago-based gangsters and focusing upon the equally troubled New York during the classic Prohibition Era and beyond.

The intent behind the range is to introduce a unique 28mm range of gangster and underworld types. The ‘unique’ feature is that the range provides ‘portrait’ sculpts of New York’s most infamous gangsters, personalities never offered in miniature before.

The figures are sized to fit with other current manufacturers ranges. For example, they are comparable in size to Bob Murch’s line of gangsters but are perhaps a little slimmer.

Though the figures fit in well with any 25 – 28 mm gangsters you may have and will work with any rules, they were designed for the rule set We Only Kill Each Other offered by The Virtual Armchair General.  (http://thevirtualarmchairgeneral.com).

The first release comprises of 8 bosses, 20 soldiers/gangsters, 2 vignettes of 3 and 4 figures and one civilian figure- our little newsboy ‘Headline Henry’. These are nicely proportioned miniatures, based upon period photographs, and really capture the spirit of the times, these criminals turned ‘folk heroes’ who reigned with fear and violence.

The company also produces a series of vignettes for life–and death–in the underworld. Already completed and offered for sale is a scene with three figures, one of whom has his feet in cement, and another of the Hot Seat with condemned, Warden, Guard, and Priest. More planned Vignettes are planned to include such events as Albert Anastasia’s Last Haircut, and other memorable scenes.

If the demand is there, Pulp Miniature is hoping to continue to expand the line and perhaps go into other Pulp genre lines as well.

You can buy figures singly, as a crew or as a gang, plus the entire range is available in the ‘An Offer Too Good to Refuse’ Deal. If you buy the figures via one of the 34 ‘Deals’ you will realize a savings of 20% off the cost of buying the figures and vignettes separately. Orders over 50,00 USZD include a free figure. All our figures are made of 100% lead-free pewter and come unpainted.