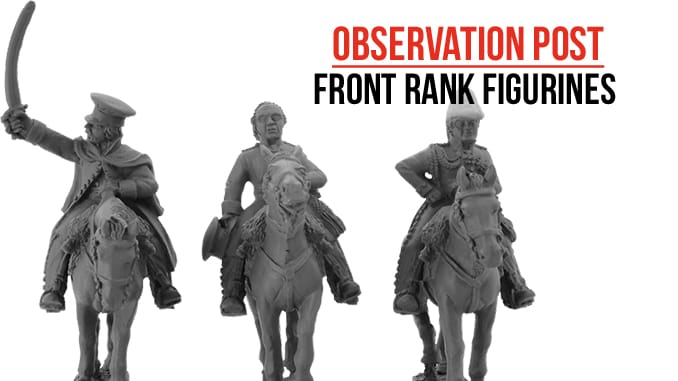 Front Rank Figurines produce some of the best 28mm Napoleonics on the market, and are still adding to their copious ranges. Most recently, its been all about the Prussians, with artillery and now Generals based upon the personalities of the period.

The pack sent for review is PSNRPK – Prussian Personalities. We have Von Gneisenau in his bicorne hat, Blucher with his sword raised, beckoning his ‘children’ on, and York, hat by his side. These figures are only available in this pack of three horses and their riders.

These are very well sculpted figures, from the quality of the uniforms, the likenesses of the personalities themselves to the horses and saddle details. These are pleasingly ‘chunky’ figures, in the Front Rank style. This means that they may not fit with the ‘realistic’ proportions of some ranges, but are perfectly acceptable in their own right. In fact, given that they are major personalities, I’d argue that these are perfect for making a statement regarding the presence of such commanders on the battlefield.

I’m a fan of ‘figures of a larger size’, perhaps because I’m a gentleman of ‘fuller figure’ in real life, but mainly because they appear easier to paint than the more ‘fiddly’ ones. I don’t game the Napoleonic period but can see how these would appeal. Of course, if Front Rank ever branched out into the American Civil War to the same standard, I’d probably be one of their first customers!