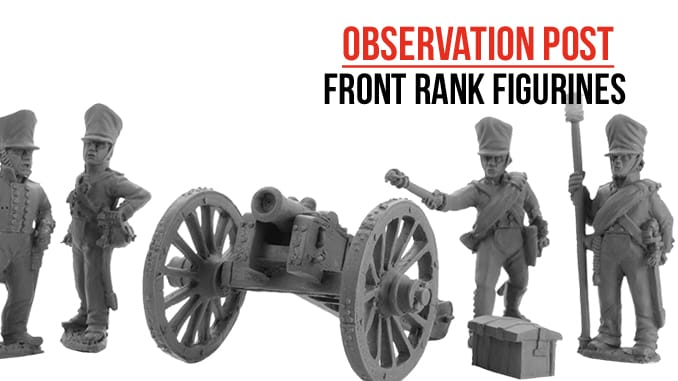 Front Rank Figurines are a renowned manufacturer of miniature ranges from a number of eras including medieval, late 17th century, 18th century and a great range of Napoleonics. Some of their more recent offerings include Prussian Artillery.

The packs sent for review are a 6-pounder gun, a 7-pound Howitzer and two Foot Artillery crews.

The two guns are beautifully sculpted and the cast, with both gun and carriage being crisp and clearly detailed. The barrels may need drilling out for some gamers but there is a recess at the business end of the barrel, which works well from a distance. They are simple to assemble, with a metal rod to be used as an axle.

The two gun crews consist of 4 figures, with one set being posed loading and the other firing. They all wear covered shakos, some with blanket rolls and one in an officer’s uniform. The level of detail on the uniforms is of a superior standard, and all the relevant equipment is present, such as cartridge boxes, shortswords and clearly defined crossbelts.

Front Rank figures are perhaps little more ‘chunky’ than those from other manufacturers but they are all the better for that aspect. The attention to detail is excellent and they always look great on the tabletop. Another great contribution to the range and some of the best Napoleonic figures on the market.