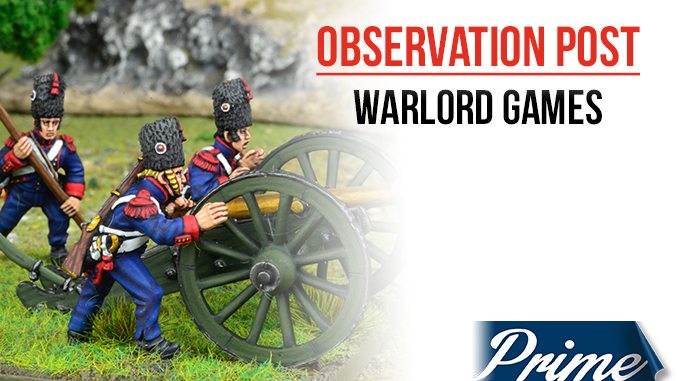 Warlord Games are supporting the release of their Clash of Eagles supplement with a swathe of new releases for the French Napoleonic armies. Some of the most recent are these Imperial Guard Foot Artillery, either firing or laying a howitzer, a 6-pounder or a 12-pounder gun.

Each of these guns come with four crew in a range of poses, whether firing or preparing to fire as required. The gun and figures are cast in metal. As members of the Imperial Guard, they all wear the standard bearskin and uniform. The different poses make a nice vignette and would benefit from careful painting, given the amount of detail sculpted onto the figures. Epaulettes, buttons, equipment and French Imperial eagles are all there and call for attention.

The gun carriages and various barrels are equally well realized, with evidence of some suitable research to ensure they are as accurate as possible. Although the pieces could be assembled and placed on the table as is after painting, it would perhaps be best to place the gun and crew on a suitable base for strength. Personally, I usually put my guns onto bases as soon as possible, and either add the crew or keep them separate to show casualties.

These are not only a useful set of wargaming artillery pieces but also fine models in their own regard. Although perhaps released at the same time as the Clash of Eagles supplement that details Napoleon’s campaign in Russia, these would serve on a number of fronts and could perhaps be used in armies throughout the era. If you have a French Imperial Guard Army, then these are a great option.