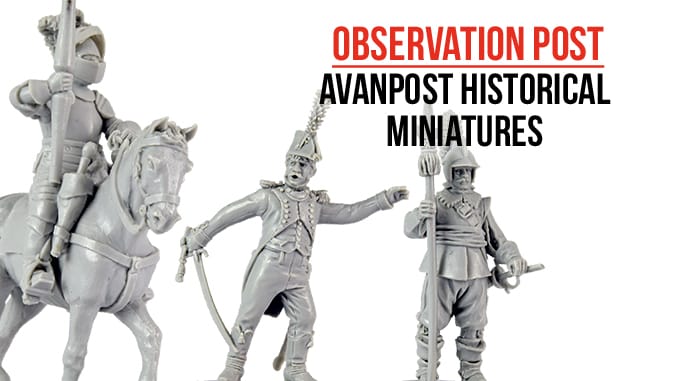 Avanpost Historical Miniatures are a Russian company which produce figures for the Napoleonic and Thirty Years War period. These figures came to us somewhat ‘out of the blue’ and , as you can see, they are very impressive looking indeed.

The miniatures are made from a polyurethane resin (which is pretty close to hard plastic) which is popular with Russian sculptors.

At the present time, Avanpost’s ranges comprise Napoleonic Era French and Russian infantry and gun crews in resin and white metal, and a Thirty Years War range which is resin only. The resin used is a very forgiving material, strong but able to bend rather than easily break.

The level of detail in sculpting and casting is excellent, with every figure being full of character. Whether uniforms, equipment or facial features, these are frankly some of the best 28mm historical figures we have seen. The figures cry out for a steady paintjob, with enough incised detail to allow for a number of different painting styles.

Roughly the size and proportions of the Perry Miniatures range, these would look fine alongside similarly proportioned figures. They would naturally form the centrepiece of any army or could be used as the front rank of a unit bulked out with figures from other companies.

Although Avanpost do not offer any pre-composed sets, the customer is able to decide upon how many and which soldiers he wants to recruit. In this fashion, gamers can decide to field a line or column of 20 identical fusiliers, or a set of 13 different figures, or 2 platoons of a sergeant and 10 grenadiers. By purchasing single figures, its possible to get exactly what is required, and the gamer can choose from a whole number of different poses.

We often wax lyrical about miniatures, but these caused a bit of a buzz in the office. The sculptors and companies currently working in Russia seem to have a different approach to what is possible in miniature sculpting and casting than those elsewhere. We’d suggest getting in touch and asking for samples so you can see the quality of Avanpost figures for yourselves.