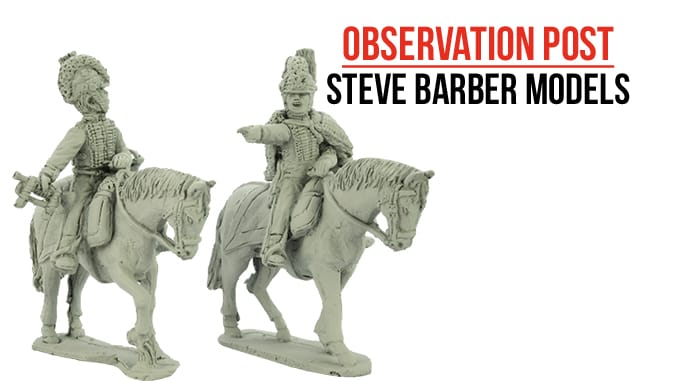 Steve Barber Models is a company with a swathe of different ranges. Many of these deal with the less obvious aspects of certain periods or fulfil niches that other companies fail to fill. We have examples here of three packs from two different ranges.

The first pack is NB1, British Napoleonic Royal Horse Artillery Mounted Command. This consists of two mounted figures in Tarleton helmets. One is a senior officer with pelisses, pointing towards a distant target as he shouts orders. The second figure is a bugler, sitting on his horse with his bugle at rest on his thigh. The uniform details are well sculpted, and the horse equipment is well rendered.

The next pack is a single mounted figure, NFG1, representing Charles Lefebvre-Desnouettes in his role as leader of the Guard Chasseurs à cheval cavalry during the ill-fated invasion of Russia in 1812. The uniform of this high-ranking officer is again very well-rendered, with the pose based upon a number of contemporary images.

Finally, we have ERH41, a Honved Cantiniere from the 1848 Hungarian Revolution range. A Cantiniere was a female camp follower who acted as a purveyor of wine, tobacco and other soldier’s luxuries when on campaign. With her military cut jacket and skirt of dress underneath, the figure could pretty much serve in any French Napoleonic or later army.

These are just three examples of the many hundreds of figures available from Steve Barber. In 28mm, the company has Ancients, Medieval, Renaissance, Napoleonic, ACW, Hungarian Revolution, Franco Prussian War, WW1 and WW2. There are also 10mm and 40mm figures available.