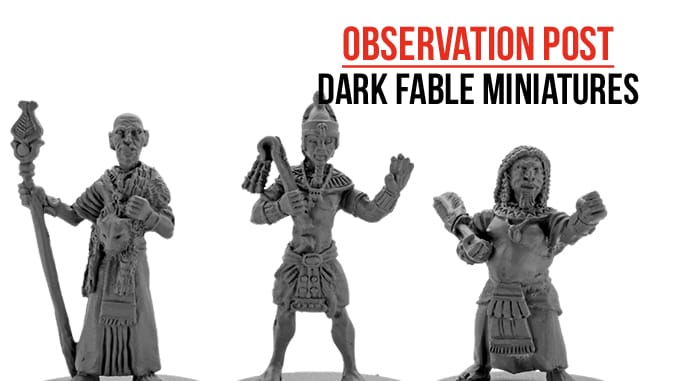 Dark Fable Miniatures are a small company which produces a fantastic range of Egyptian-themed miniatures. From the prosaic to the mythological, the range has something for everyone.

We picked out 3 packs that most ably represent what is on offer. Our first pack contains 3 figures and is entitled Pharaoh and Followers. Here we have the Pharaoh himself, dressed in court attire. The Pharaoh holds emblems of his authority, a crook and flail and wears the crown, which should be red and white,  which symbolise his dominion over upper and lower Egypt.  He is accompanied by a finely dressed portly nobleman and a rather stern looking high priest.

The second pack moves us to the world of the Egyptian undead, but not the more obvious mummified human. Instead, we have something pretty rare, an ambulatory skeleton of one of the Nile crocodiles. No doubt resurrected or cursed by dark magic, this undead guardian is ready to put the bite on anyone who comes near.

Finally, the third pack takes us deep into the realms of Egyptian myth, a Sedja Beast. One of two available from the company, this creature has the body of a lion and the head of a cobra. The Egyptians knew this type of being as ‘the one who has travelled far’, and they acted as servants of the Gods.

These and the other figures in the range are fantastically well sculpted and cast, and the whole set is one of the most comprehensive examples of the Egyptian blend of reality and mythology on the market. The website also includes some interesting Fantasy figures, plus a Temple of Set and Bunny Girl Adventurers ranges that you will either recognise or covet.

For more information and to see the complete range, go to www.darkfableminiatures.com