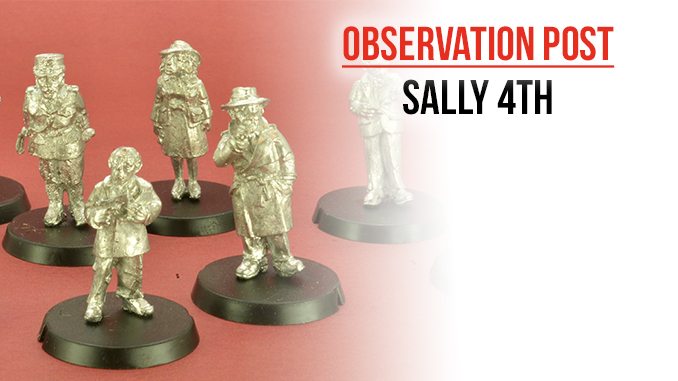 Sally 4th have recently begun to produce their own range of miniatures. In this case, they have produced some great miniatures to support their pulp range of buildings and the Pulp Alley rules they distribute in Europe and the UK.

Taking their theme from the world of classic movies, the first three packs are Café Americain Part 1 and 2, plus Colonial Police. Those with an interest in black and white movies will easily recognize each of the four miniatures found in each pack.

Pack 1 consists of The American, The Pianist, The German and The Thief. Two of the figures are dressed for an evening of entertainment at a nightspot, whereas one character is dressed for the streets in trench coat and trilby, whilst the last figure wears German military uniform of the early WW2 era, complete with Luger drawn.

Pack 2 has The Lady, The Resistance, The Inspector and The Parrot. The Lady and The Resistance appear ready to travel, whilst The Inspector wears French Colonial Police uniform and brandishes a sheaf of paperwork. The Parrot is a stocky gentlemen in a fez and wields an elegant cigarette holder.

Each miniature is evocative of a moment of cinematic history, with a caricature-ish, suitably characterful approach to the sculpting style. It would be great to see more in this range, aiming to portray the Pulp heroes of other times and in a similar style.