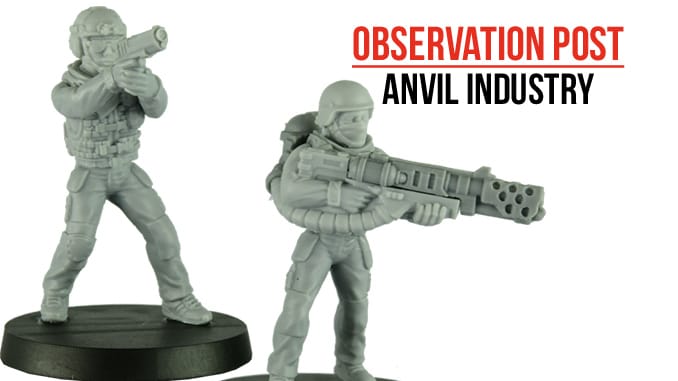 Anvil Industry have added to their ever expanding range of multi-part resin miniatures with these Female Soldiers, designed to represent Private Military Contractors, Armed Forces or Civilians.

These figures are a part of the Regiments system. This means that the company provides frames of resin cast ‘parts’ which may be purchased and put together. In this way, you are able to customize your own figures, choosing from a mix of torsos, legs, arms, heads and weaponry. They also provide a number of squad or platoon deals which enable you to instantly theme your force as either PMCs / Armed Civilians or Military.

These female figures are ‘proper’ soldiers, sensibly attired and appropriate for a number of tabletop uses. The Military options are particularly nicely done, with load carrying vests and helmets. Weapon options range from the recognizable ‘modern or ultra-modern’ to the more Near Future or sci-fi. Some of the weapons seem on the large size compared to the figures, but this may be more due to the needs of casting rather than a lack of awareness of scale.

These are well sculpted and cast miniatures, and may be accurately posed and equipped based upon contemporary photographs of female warriors in the modern era. This is a great move by the company, providing something different for the gamer looking to depict the change in role of women within the combat environment.