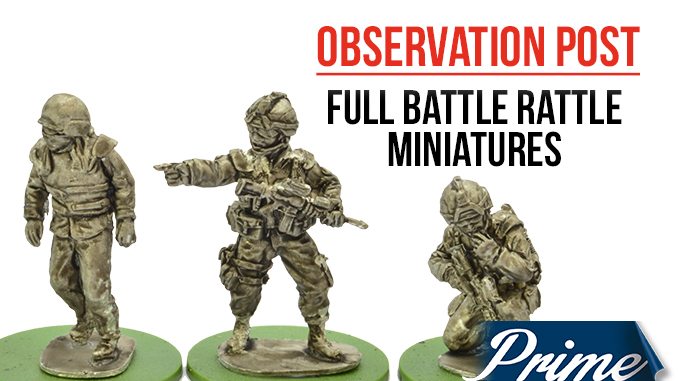 Full Battle Rattle Miniatures is a relatively new company which has decided to focus upon the Canadian infantry who have served with ISAF in Afghanistan and beyond.

The phrase ‘Full Battle Rattle’ is a military slang term for going on patrol or into battle with full equipment loads. With this in mind, the sculptor of these miniatures has added a great deal of excellent detail to these figures. Every piece of body armour, pouch and pack has been re-created, even down to shoulder patches and empty mounts on the helmets for electronic equipment.

The pack presented here is FBRMCDN 4, ISAF Canadian Command Element, which consists of four figures in total. There is an officer and NCO, a radioman and a local translator. The three soldiers are armed with M4 Carbines in full kit, one pointing and giving orders, the second reaching down to operate a personal radio, perhaps on the squad or platoon net, and the final one kneeling whilst using a ‘man pack’ radio to contact HQ, perhaps calling for air support. The final figure is unarmed and wears civilian clothes, although he does wear body armour and a helmet. He wears a cloth and sunglasses to conceal his face, as do many of the locals who serve with ISAF forces.

These are great miniatures and a fitting tribute to the men and women who continue to serve with the Canadian armed forces. The level of sculpting is excellent and the poses are very natural. The subject itself is an interesting one, given that not many companies would be willing to depict one force, in particular when that force is not recognized enough for their contribution to world peace. We hope to see much more of a similar ilk from this company in the future.