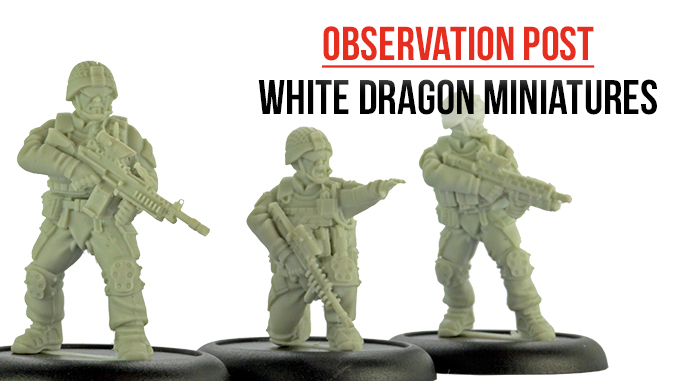 White Dragon Miniatures hit the market with some great sci-fi miniatures in their Shattered Void range. Yet what really seems to be exciting people are the master prints of the Courage In Contact range, based upon Modern British forces from Iraq to Afghanistan and beyond.

These are some of the best miniatures of their type on the market. I am a huge fan of the Empress Miniatures range and would rate these as highly as those. They are slightly more ‘chunky’ than the Empress ones but are equally as detailed.

The level of sculpting on the uniform and equipment is of a high quality, with weapons, load carrying equipment, comms , body armour and more being excellent.

In addition, the range is designed to represent a variety of British Army troops, from Paratroopers to Light Infantry, in the years from 2009 to now. The figures on show here appear to be dressed for combat in Afghanistan, wearing the ballistic glasses and wielding the L85A3. One weapon has an attached grenade launcher and the other has an M249 SAW.

The posing is very realistic, perhaps reflecting the sculptor’s time as an infantryman – who better to re-create these warriors than one who has actually served?

These figures are out at the Hammerhead 2018 show, and will be available from then on via the website or at shows where the White Dragon team turn up. Get saving now, and get in touch with them soon – just wait until you see the Foxhound they are bringing out!